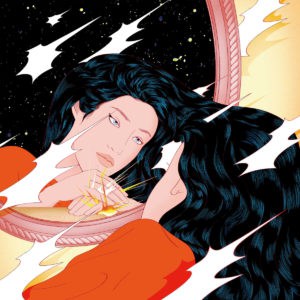 Whether she’s in Korea, Spain or Austria, it doesn’t matter what the occasion is. Peggy Gou on the decks means groove and jive, and a more than likely chance shoes are coming off. Cult followers have a broadened base now that Peggy Gou has hit the world-stage in style, featured on Mixmag, Boiler Room, Resident Advisor and more for her uncompromising image in dance.

That image is continued in her self-curated legacy with Once, an extended play which fuses house, funk and a little disco and blurs the line fashionably. The punctuation that needs to be established is that Peggy Gou has a refined taste which is eminent in her DJ sets and brought forward and further in her original works. “It Makes You Forget (Itgehane)” beautifully constructs an eclectic work at 125 bpm, piling chimes on top of cymbals on top of break-rhythm snare. Gou takes to singing in the mid-ground where her voice sits appropriately in the mix, in sync with the melody to keep the balance and the emphasis on rhythm. The Ibiza ready tune paces itself in nu-disco fashion – sunny, utopic and a little sensitive. Arbitrary sample loops, usually added to to entrance clubbers who wade to the sound in euphoria, are though out in fuller lyrics from Gou yet give the same, if not heightened effect. Her poetic lines which romanticize the sensation of forgetting embolden her and bring pleasantries to the dance floor as they pair with the rolling piano and drums.

Less a juxtaposition and more a variety, “Hundred Times” is the reminder that Peggy Gou respects her own scene; crystaline blips and and rubbery bass-line bounce on top of a throbbing rhythm which perpetuates from beginning to end. It’s designed to keep you moving nonstop, only swelling its melody about halfway through its seven-minute mark for a mild rest, only to descend back into its realized kick-drum, classically four-to-the-floor, to allow the synths to change up, fade out and let the percussion finish you off in a sweat.

Lastly, “Han Jan” is reminiscent to her prior release Seek For Maktoop (2016), punching synth stabs along echoey synths and swinging hats. Gou comes back in with a rap, quick and raspy in her natural tone, and despite this feeling less effective it still provides the needed variance and sustenance for an EP which overall brings the heat. Atmospheric-disco and celestial “vibes” are curated to to Peggy Gou’s dance-centric taste, and her slight risk with self-made vocals pays off, giving the necessary edge and making a stellar production into an accomplished and artistic set of tracks. Once isn’t important because Gou is trending, but because she made it in style and exception to the trends currently existing.