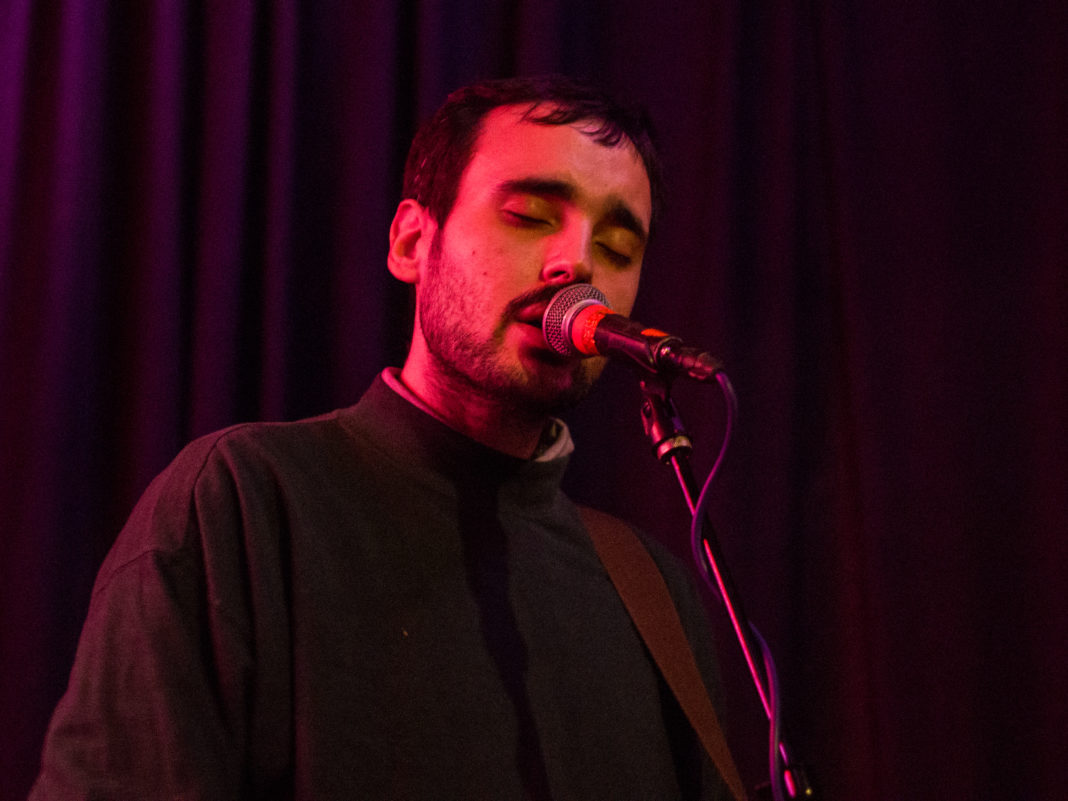 I had never been to Double Wide before, but if I could describe what I think would be the ideal concert setup, Double Wide would fit the description perfectly. It’s very small with Christmas lights hanging from the ceiling, and dim lighting, which makes the environment very cozy. The stage isn’t very high, and to get to it the bands have to walk up to it through the crowd. If they weren’t playing, the band members were right in the crowd enjoying the show just like everyone else and mingling

William Austin Clay took the stage first, along with a drummer and bassist. The drummer had a fairly simple setup, mostly using an electric drum pad to play a variety of sounds. Their style had a good amount of diversity, including a reggae song, but they consistently had a lo-fi touch. The lead, (William Clay), talked to the crowd in between tracks and apologized for arriving a little late, and overall had good energy throughout the set. Raab Zamboni quickly setup after, and I had zero idea what to expect. So much so, that I had not even realized they had started their set when they did. The drummer was talking into the mic, and the rest of the members were playing what seemed to be random notes, I figured they were still tuning. Then I looked at them, and they were making strange, awkward movements and that’s when I finally realized, “oh wait, they already started.” Describing Raab Zamboni’s sound is a challenge. On Bandcamp they describe themselves as a “quartet of fake jazz broccoli noisers,” which says enough about them. The quartet consists of a drummer, guitarist, bassist (who is our very own DJ Killa Kam), and someone primarily using a modular synthesizer. Everything about what they were playing was unorthodox. The rhythms were strange, at times the drums were almost not in time, and there was a lot of dissonance, sometimes notes were off key, but it was captivating. It didn’t make sense, and it shouldn’t work, but it somehow did. It’s hard to explain it in words, it’s a show that can only be understood by seeing it live, partially because there’s a big performance aspect to it.

The guitarists almost acted and played like they had never seen their instruments before, and they made really stiff erratic movements. The drummer “lost” a drumstick and looked all around the stage for it, and then walked around the venue, before finally returning to his drumset and “finding” his lost stick next to his seat. At one point he asked the guy manning the synthesizer if he “still had that screaming sample,” which he did, and then the drummer was screaming along with it. Towards the end of their set, he walked out into the crowd and quietly laid down on the floor for a few minutes before closing their set. It was a lot to process, but I enjoyed every moment of it. The Spirit of The Beehive was a lot more of a traditional band, but still had heavy experimental aspects to their music. They had five members, including two vocalists, which created a rich sound that filled up the space easily. Their sound has a lo-fi, raw atmosphere, but they also had a lot of additional percussion such as tambourines and shakers, which added a lot of brightness. Their set was varied, and had a good mix of heavier, aggressive tracks, mixed in with softer ones, controlling the energy very well. I didn’t know what to expect from them either, but I thoroughly enjoyed their set, and felt that they were a really good fit for the lineup. At last, Palm took the stage, taking some time to set up their many pedals, MIDI keyboards and other gear. I had heard many times before that Palm’s music is different and even more enchanting live than on their recorded albums, but they still surprised me on several occasions. For one, I did not expect to hear the steel drums that are in “Dog Milk,” because I knew they were a result of Kasra using a MIDI pickup on his guitar, but using that MIDI pickup he was able to play them along with all the other sounds they employ using this method.

Many of Palm’s strongest qualities are only amplified in a live setting. The dynamics are a lot more pronounced, making the chaotic, vigorous passages of their songs even more frantic, and the relaxed, melodic ones more serene and quiet. Many sections were extended or repeated more than usual, creating highly textured walls of sound that flooded the space and almost put you into a trance. I didn’t expect Palm to be able to recreate all the little intricacies in their recorded albums, but if anything they only added more during their live set, including small, but noticeable embellishments or little details that are not normally heard. The technicality of their music is also much more obvious when you can see the band members looking at each other, keeping time and ensuring that they stay together. Given the odd time signatures and rhythms they use, it’s easy to see how this would be challenging, but they never faltered, and it’s clear that they have good synergy with each other.

All of these elements together pushed their set to be even more incredible than their album. There was not a dull moment while they were on stage, or when anyone was on stage for that matter. I went in only being familiar with one of the four bands playing, but left fascinated by all of them, excited to go home and delve deeper into their discographies.