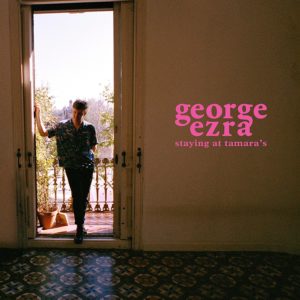 As I listened to this album, the images of childhood swim meets in the summer, riding in a convertible on a hot day, or big family picnics were returning to my mind. Not because the exact songs played throughout my childhood, but because they could have been unnoticeably replaced. After the immediate success of his first album in 2014, George Ezra traveled to Barcelona and stayed at a friend’s place named Tamara away from the glitzy abodes his new fame could have afforded him. While there, he created this eleven song album about dreaming, happiness, love, and all things uplifting, cheery, and family fun. George Ezra’s voice is suited to positivity with his uplifting baritone, so it is playing to his strong suits. There are a few more solemn songs at the end of the album including “Saviour” and “Only a Human,” but even those don’t come across as much more than slightly melancholy because of his tone and surface level lyrics.

Throughout a few of the songs, especially the beginning cotton candy pop anthems had a few aspects that I found annoying. There were edits of adding in little effects like in “Get Away” there is a little tidbit of a brass band because he mentions it in the lyrics and there unnecessary “ahas” added in throughout that would really ruin any momentum I was getting from the song. “Shotgun” is of the same vein where the lyrics are about riding in a car on a beautiful, sunny day, which I’m sure will be listened to by many doing exactly that, but if it were left simple and sweet it may have had a more genuine feel than the pop tune that it is with synthesized rhythm and echo effects. Even though I have expressed my distaste for some others, the most bizarre song is “Sugarcoat.” At first I was following the story of going to South Africa and having a good companion but then it talks about going on a trampoline and repeats “big jump” many times and maybe these profound lyrics are going over my head, but I don’t think that is the case.

A few tracks were released ahead of time such as “Paradise,” which is also a pop anthem like the ones I mentioned before, but I’d say the most effective because of its catchy and more unique elements. “Pretty Shining People” is also very catchy and is absolutely perfect for live performances because the song has handclapping moments, sing-along moments because of the repetition, and a euphoric tone throughout.

Basically this album is for fun, light times and family friendly events, but if looking for any amount of edginess or more than a smidgen of originality this won’t be for you.