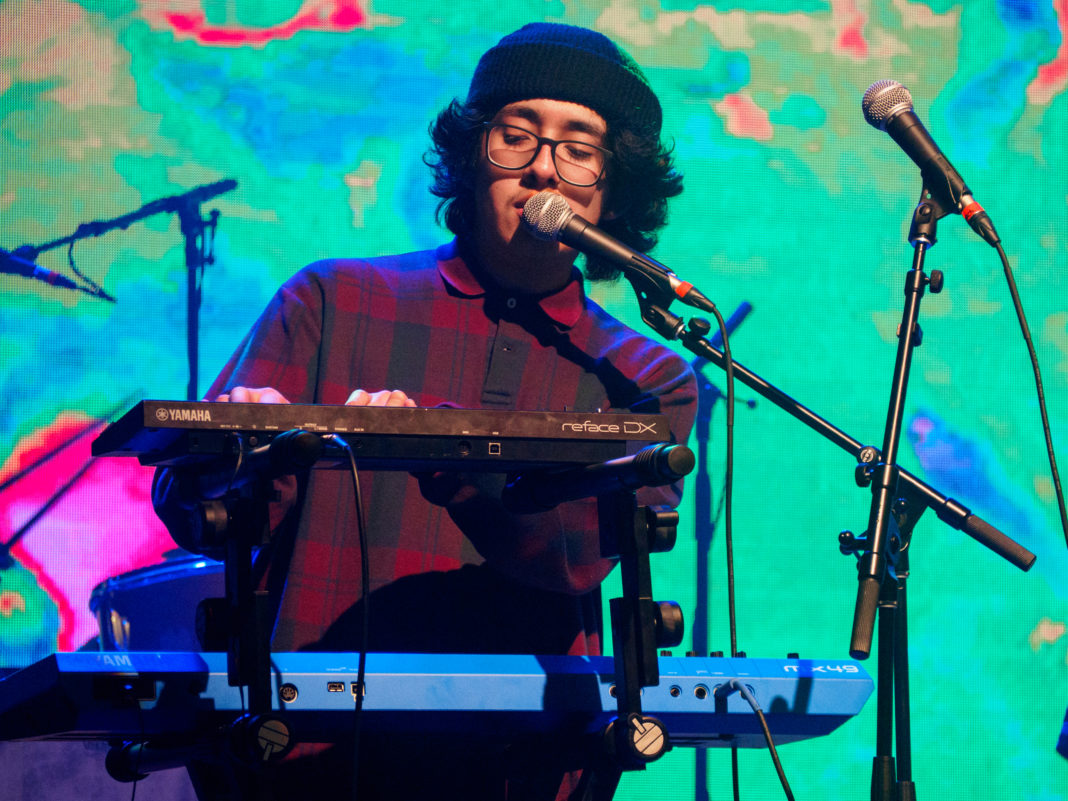 Months after his first Dallas performance, Cuco sold out Trees yet again, having to upgrade venues to Canton Hall, which also sold out within days. It shouldn’t have been a surprise given Dallas’ massive support for Cuco, but it’s still baffling to think about how quickly and organically he’s grown, and he proves that he’s earned it.

He was joined by mostly the same crew as before, as well as Jasper Bones and August Eve, who opened the show. Together they consistently displayed their talents, and filled the night with warbling guitars, dreamy synths, and impassioned vocals.

Jasper Bones was up first and started the night wonderfully with his blues influenced sound. He played a guitar himself, and was joined by a bassist and a drummer, and they were able to produce a really rich, full sound. This is partially because of Jasper Bones’ himself, who has a deep, warm-sounding voice that pairs really well with blues music. The large display behind the ensemble played bright geometric patterns, which complemented the psych-rock inspired guitar riffs. In between sets, the DJ would play cumbia, or Selena songs to keep the crowd’s energy up, meaning the hype hardly ever lowered. After a short while, August Eve took the stage with two keyboards, joined by the previous ensemble, including Jasper Bones on guitar. August’s singing style is theatrical, with long held out notes overflowing with emotion. She used her synths to create a lush textured sound that paired well with her voice without overpowering it, making a a grandiose effect that captured everybody’s attention. Before Cuco came out, J-kwe$t and lilbootycall each did a song on stage to get the crowd moving. His touring band Shidu took the stage and started playing “Lonelylife,” before Cuco jumped out singing his verse. The performance that followed was heartwarming and exciting, partially because of Cuco, and because of the crowds absolute appreciation for him, and his significance to them. It’s not often that you get to see a latinx artist up on the stage, in a crowd surrounded by other latinx’s, but Cuco shows are one of them, and that’s a big part of what makes them so memorable. It’s inspiring, and comforting, and Cuco understands the significance of his success, but remains extremely humble.

Halfway through his set, he brought his parents out on stage to thank them for everything they’ve done for him. He then thanked the crowd for their support, which has allowed him to provide for his parents. The entire time, his parents radiated pride and could not stop smiling. Cuco played all of his most popular songs, including “summer time high time” with J-kwe$t, and he kept his promise of playing his trumpet this time around (last time it wasn’t working properly). He also performed his newest song, “Sunnyside,” and a cover of “Te Quiero” by Hombres G, which he explained he discovered through his parents musical tastes. Before ending his set, he thanked the crowd again for selling out the show, making it his biggest headliner concert, his previous record being the preceding Dallas date. He explained that he’s just a “Mexican kid from California,” and he wants to someday see people from the crowd up on stage just like him. Without sounding too cheesy, he managed to be inspiring, and end his show on a strongly positive note. I have no doubt his crowd sizes will only continue to increase.