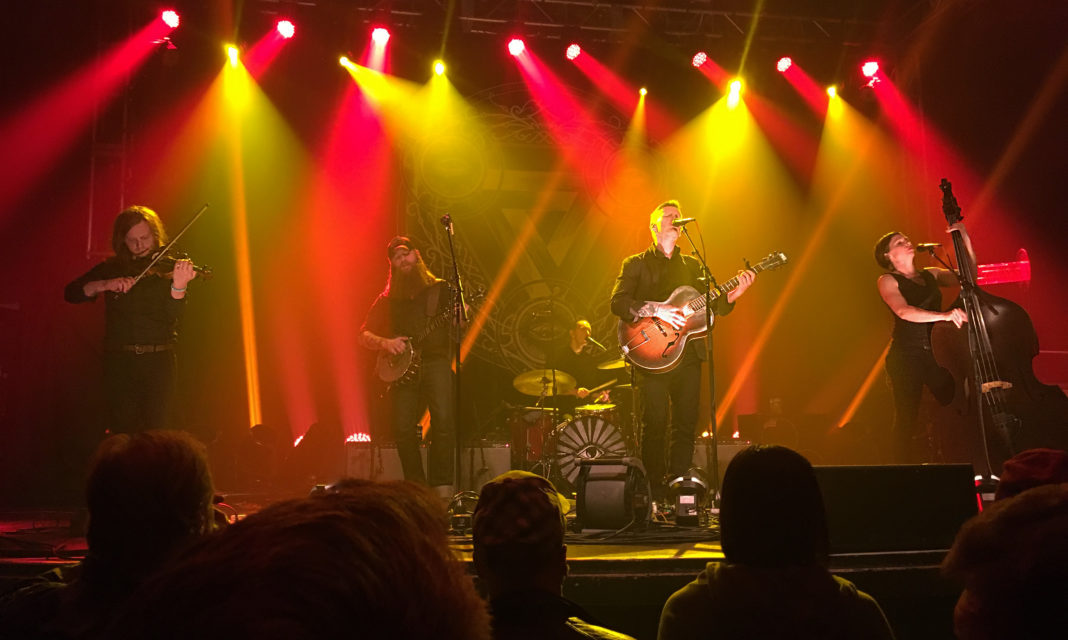 Saturday was a momentous night at the Granada, as it was the last stop of The Devil Makes Three’s tour as well as their opener’s, The Huntress and Holder of Hands, first time in Dallas. The crowd became intrigued once they watched a violist, string bassist, and cellist take center stage alongside an electric bassist and drummer. The openers are a true fledgling band, as their first album is barely 5 months old. However, the members that make up the group- especially their front-runner – are anything but new to the music scene. Leading the group is Morgan Eve Swain from the duo Brown Bird, which saw an abrupt end in 2014 when her partner and husband Dave Lamb lost his battle against Leukemia. Swain’s lyrical style may not be as poetic or academic as Lambs, but it’s just as emotional and compelling. Her instrumental prowess hasn’t diminished either, as throughout the night she switched from viola, to guitar, to ukulele, and even a shaker.

They started off the set with “Shadow of the Hunted,” the first song off their album Avalon. The theater went utterly silent as the three women sang in a perfect, almost haunting, unison. I was astonished at how ridiculous the harmonies between Swain, Emily Dix Thomas, and Liz Isenberg sounded live- it was almost identical to that ­of their studio recordings, which not many bands are able to replicate on stage. Later, Swain let E.D.T (Thomas) take center stage to perform a new song she wrote by herself, which was a soft, smooth, and vividly eerie tune. Unexpectedly, they followed up with a cover of “When You’re Gone” by The Cranberries, at which Swain informed us that she realized Dolores O’Riordan died right after they made it, and that the same song was the one played at her funeral service. Afterward, Swain lightheartedly said one of the most memorable lines of the night: “You like sad songs? Then you came to the right place.” By the end of the song, everyone in the theater was clapping to the beat.

Before that night, I was sure I would never experience Brown Bird live.  Yet, Swain was able to make that a reality. I was ecstatic as I began to hear the familiar opening notes of “Bilgewater,” a classic Brown Bird song from their project Salt for Salt. Her voice took on a new style, one which was raw and rough, which made this recreation of an old favorite even more mesmerizing. The crowd went wild, as Brown Bird is one of the most legendary bands of the southern gothic music community, of which the headliners were of as well. If they didn’t realize who she was beforehand, they did and were in awe afterwards.

After a brief intermission, the crowd began to thunder in hoots and hollers as the curtain rolled up to reveal The Devil Makes Three onstage. They started off with “Drunken Hearted Man,” the first song off their newest album, Redemption and Ruin, with a phenomenal fiddle performance. They really know their fan base, as they played through the favorites from all their previous albums. It was the ultimate DM3 playlist, where we couldn’t predict which song they were going to play next and continuously overflowed with excitement when we heard the start of our next favorite begin to play.

There’s something about this Dark Americana band that possesses people to stomp, yell, and dance along to their music. They built up the momentum with “Spinning Like a Top,” then released tons of energy into the crowd with “All Hail,” and created a flawless transition between the later tune and “Black Irish.” The crowd by far was their loudest when reciting “Old Number 7” at the top of our lungs, with “Stranger” not too far behind.

Not only was the set list amazing, but halfway through the concert the lead guitarist, Peter Bernhard, announced that after the tour they would be going into the studio to record their next album – here in Dallas! That was an amazing addition to top off the night, especially since right after that revelation they played some new songs for us. They were all wonderful and gave the impression that this next album is going to be darker and folk-rock influenced rather than ragtime and bluegrass. The band was just as lively as the crowd. You could tell they love to play their music, and after more than 15 years they’ve built strong relationships with one another and their individual presence on stage.  It’s usually entertaining to watch a band you love play live, but it’s so much better when they’re just as animated and personal as the crowd that’s been waiting a long time for them to come. Bernhard traveled around so organically, sometimes to play by Cooper McBean and at other times to get close to Lucia Turino and her beautiful string bass. Speaking of, Turino was enchantingly graceful that night with how she sang and how she handled her string bass parts. I was in utter awe each time she started getting really into a song to the point of performing stylish back-bends with her bass. With all these interactions combined, they were a fantastic group to experience playing together.

They began to close the night with another song off Redemption and Ruin, “I am the Man Thomas,” And ended with “Aces and Twos,” during which the crowd was the wildest in their stomping, dancing, hollering, and first pumping than any other time that night. Once they left the stage, an almost satanic-like chanting of “Devil Makes Three” began from the audience and persisted until the band was summoned back on-stage. They then performed “Good Again,” were thrown a copy of Kurt Vonnegut’s The Sirens of Titan from the crowd, and made their final exit.

It was such a fun, lively, and exceptional night, of which both these bands and their fans will remember fondly.