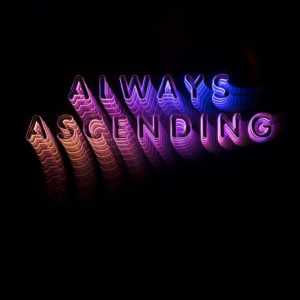 Imagine it’s 2005 again, you’re over at your friend’s house who just got this new game called Guitar Hero. It puts you on the stage rocking out to staples in any rocker’s catalogue on a plastic guitar controller with 5 colored buttons. You’ve never played guitar, but now you’re blazing through your favorite rock songs like a guitar god. For me and many others, this was where we first heard and probably fell in love with a Scottish band called Franz Ferdinand and their single “Take Me Out.”

Ever since then, they’ve been able to catch our ears when they have something new, like “Do You Want To,” or “No You Girls,” which the latter was used in an Apple commercial, so the chorus might have been burned into your brain for a month after seeing it. Sadly, time and a few wrong steps have made them a faint memory of what they used to be, and their latest album Always Ascending proves it.

This album starts out with questionable, lacking and even ear-offending musical choices (such as the title tracks’ crooning and very slow intro) and seems to never end with the questionable and lackluster choices throughout most of the album. The main culprit of these offenders? The lyrics.

The second track “Lazy Boy” is probably the main offender of this, because the lyrics are just about how he’s never going to get up, with singer Alex Kapranos repeating “I’m a lazy boy” over and over again throughout the song. I’m not looking for deep lyrics in every song, but these lyrics seem like a sign of laziness and a lack of inspiration. What upsets me the most with “Lazy Boy,” is that halfway through the song the rest of the band gets into a really tight disco groove with the guitarist hitting those “James Brown” chords while the drummer and bass lay down the rhythm. Of course, Kapranos comes back with the vocals, which ruins the rest of the song. Thankfully, the track clocks in under 3 minutes, so it’s over before you know it.

The best song off of this album, might have to be “Huck and Jim,” which is a nod to Mark Twain’s characters Huckleberry Finn Jim. It has the crescendo into the chorus “We’re going to America” that transports you to a full live rock band jamming out on stage, with everyone jumping and singing along, before the band brings it all back down, ready to rebuild it back up again for the listener. The use of stark stylistic changes throughout the song keeps the listener engaged and interested to hear what’s next.

Overall, the album sounds like Franz Ferdinand and the style of disco-rock that they’ve developed since their 2004 debut, but Always Ascending sounds like a sour, largely uninspired offering of this. For fans of Franz Ferdinand and a decent dance song, the best songs don’t come until it’s almost over, with “Glimpses of Love,” and “Feel the Love Go,” and “Huck and Jim.”