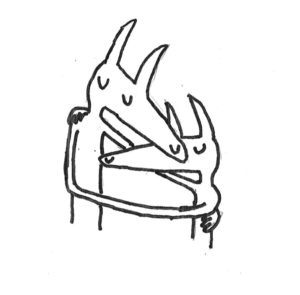 Wanting to revisit the emotional period that lead him to release the 2011 original and see how he has changed since then, Will Toledo of Car Seat Headrest has released a full re-record of his 2011 album, Twin Fantasy. The update is noticeably clearer and less messily produced than the original, as well as taking advantage of his full band after being Car Seat Headrest’s only member while recording the original.

Compared to many previous lo-fi and fuzzy bands that polish up their sound, where they seem unable to combine their new sound with the style they were known for, Toledo makes full usage of the new possibilities he didn’t have before, treating his new tools and backup band as an expanded arsenal to provide more emotional and intimate touches he couldn’t pull off previously. Yet not only is the record still admirably unpolished compared to many notable indie records nowadays, it shows that Car Seat Headrest has not lost any of the charm of their original Bandcamp releases.

The aforementioned sound updates are apparent even just from the first song, “My Boy (Twin Fantasy).” The contrast between the quiet, whisper-y opening and the bombastic outro makes it much more effective, and I found myself lightly pounding on my desk to the tempo of the drum beat. This trend continues throughout the rest of the album, giving the already anthemic songs a more anthemic feel. “Nervous Young Inhumans” is quieter on the verses and louder on the chorus, helping the verses sound more intimate and conversational. But no mention of the updated sound would be complete without mentioning the 16-minute rework of “Famous Prophets (Minds),” renamed to “Famous Prophets (Stars).” The rework contains a rather moving and powerful outro that’s grandiose for all the right ways, being an absolute joy to listen to. While it’s not Queen, the effort and emotion shown on it still give it an admirable charm.

Will Toledo has grown as a vocalist too, not only showing more emotional range, but also making better usage of vocal harmonies. “Beach Life-In-Death” is a good example, some parts showing Will sounding like he’s somewhat holding back tears, in particular the line “I pretended I was drunk when I came out to my friends. I never came out to my friends. We were all on Skype.” Similarly, “Stop Smoking (We Love You)” sounds much more concerned, like if he’s actually speaking to the subject of the song, trying to balance the delicate line of showing love and appreciation but also voicing concern towards their smoking habit. In contrast, some vocal melodies become much easier to sing along with. To this day I still find myself humming the chorus of “Sober to Death” and the line “the ocean washed over your grave” from “Beach Life-in-Death” and it’s lyrical reprise on “Famous Prophets (Stars)”.

The album was written and recorded during a relationship Toledo had with another man during college, and it’s a powerful, moving description of the stress of being a gay young adult as well as the many, many emotions at play while in a relationship. He shows conflict about his gay identity on “Beach Life-in-Death” with the line “We said we hated humans. We wanted to be human.” Being gay in a heteronormative society feels like being inhuman, and he hates those who judge him and his lover for their sexuality while also wishing to be like them to fit in and avoid ridicule.

On “Bodys,” he muses “Don’t you realize our bodies could fall apart at any second?”, realizing that good physiques and youthful bodies do not last forever, so let’s enjoy them while we can. “Sober to Death,” despite containing self-depreciating lines such as “We were wrecks before we crashed into each other,” shows a subtle hint of recognizing the value of staying true to yourself despite the difficulties it brings, turning what could’ve easily been just another self-jab into a surprisingly uplifting sentiment. You recognize how flawed and broken you are while showing you accept it, noting you’re getting a little bit better every day and are overall still happy being you.

The update of Twin Fantasy is the rare blessing of an album update that manages to expand on the magic of the original. Will Toledo should be commended for being able to successfully cross over to a larger audience while still holding on to his own unique style and vision.