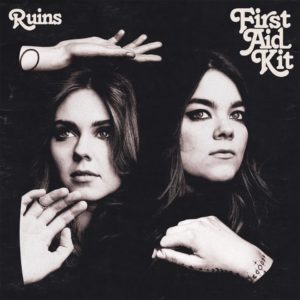 Sisters Klara and Johanna excited fans and enchanted new audiences with 2014’s Stay Gold, the critically acclaimed Americana album fraught with questions and excitement about the future and the changes it would bring. Now, after wrestling with those changes over the past four years, the Söderberg sisters shift perspectives on Ruins; an appropriately named album that looks back on the past not only with longing and lamentation, but also with self-examination, acceptance, and a lush arrangement of instrumentation and vocals that make these heartbreaking songs a powerful experience.

The sisters’ elegant harmonies and Americana style from previous albums are still present in Ruins, but they’ve been refined and twisted to, for the most part, great effect. Opener “Rebel Heart” has a powerful, slow-burning drive that is present in many of the duo’s best songs, and acts as a strong start to the album. The following songs, while perhaps not too lyrically complex at times, shift between different styles so as not to sound too similar or blend into each other.

Standout track “Fireworks” has elements of dream-pop, while other songs like “It’s a Shame” and “Postcard” manage to play with different drum and guitar instrumentation while still keeping the Americana twang intact. Along with all of the lush arrangements on the album, there are places where space is given for the songs to breathe and take on a different, refreshing feel. The first half of “To Live a Life” features soley Klara’s vocals and an acoustic guitar, while the end of “Hem of Her Dress” burts into a chorus of brass instruments and uplifting chants.
Lyrically, some of the songs on the album manage only to skate by. Songs such as “My Wild Sweet Love” and “Ruins” don’t seem to add much to the overall impact of the album, but are still held up by the voices and mesmerizing harmonies of the sisters. Other songs, like “To Live a Life” and closer “Nothing Has to Be True”, while maybe not as instrumentally rich, offer lyrics that speak to the heart and examine the past with wisdom and cutting words.

In regards to the past, the theme that centers the album, the duo doesn’t just look back at it; they look back at it through every lens, which is what gives the album such a powerful edge. Songs like “Rebel Heart” and “Fireworks” look into how the past affects the inner self. “To Live a Life” and standout track “Distant Star” sing to lost love and and ruminate on what could have been, with lyrics that cut straight to the heart. And on songs like “Postcard” and “Hem of Her Dress,” the past is looked back upon and accepted for what it is. On the latter, the sisters cry out, “I remember Spring/I remember everything/Oh, I guess that’s the way it goes.” This single line represents much of the album’s theme, as well as offers a small hope among the heartache; despite how the ruins of the past can seem powerful and daunting, all we have is now, and we must accept what’s come before to make way for what’s ahead.