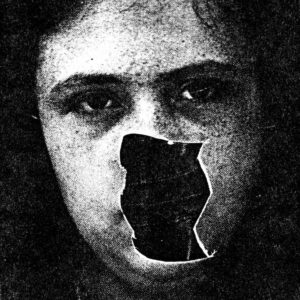 How silly is the term “post-music” to you? I see it in a lot of different places, online and off; most recently, in researching for a paper, I read that Dream Catalogue artist DARKPYRAMID called vaporwave the first “post-music” genre. But…like, isn’t there still music involved? I’m not sure how that fits. For me, “post-music” would have to be some type of art that uses sound to evoke some sort of emotional response that ALL MUSIC hadn’t achieved yet. and even then, that could be considered music to me. Like, John Cage’s experimental stuff isn’t conventionally musical but it’s crucial to consider it in the progression of music’s philosophical definitions… Either way, my point is, when I consider the term “post-music”, noise and harsh noise are the closest thing to that that I could think of. And Prurient’s latest album Rainbow Mirror is definitely making me ponder that harder.

One of the biggest critiques that have been lobbed at this album right out of the gate (even before its release) is that it’s too long. At 3 hours and 20 minutes, it may look daunting. But I could not help but laugh uproariously at the previously mentioned article. This is NOISE MUSIC we’re talking about. Have they not always been playing a long man’s game? With only 15 tracks to pick from, I could find you way more difficult records to sift through that aren’t even noise. Hell, Chris Brown released a two-and-a- half hour album of 40 songs that he instructed his fans to buy and then stream so he’d get the billboard numbers. Dom Fernow of Prurient has been kind enough to break up Rainbow Mirror into 15 manageable chunks for us. So with that in mind, I find this album more than feasible to work through and review. What’s more: despite its length, this new record offers up a pretty great variety of compelling material from almost beginning to end; it’s not just static for four CDs.

On Rainbow Mirror, Fernow has saw fit to veer away from the ear-corroding harsh noise style he cultivated on albums, like Pleasure Ground and his last LP Frozen Niagara Falls, in favor of what he calls “doom electronics,” a much more ambient and cavernous sound that he improvised and performed along with labelmates Matt Folden and Jim Mroz. Additionally, this album lacks lyrics, a previously defining characteristic of Prurient’s oeuvre. Surprisingly, leaving out vocals (with the exception of the track “Naturecum,” although there aren’t many words to make out) left Fernow’s soundscapes saying more than usual. These pieces are stunningly hypnotic, meditative, eerie, calming, grueling, and electrifying all at once. Take the second track, “Walking on Dehydrated Coral,” whose initial dusty sound collage devolves into cutting laser/knocking sounds that persist through barren dark ambient passages as well as impenetrable walls of distortion. It sounds scary and unpleasant, but the textures that this trio comes up with are just so intriguing I don’t want to turn it off!

The shortest track on here clocking in at 5 minutes and 38 seconds is the opener, “Barefoot God,” and it’s probably one of the best decisions made for this album’s flow. Although it’s certainly a dark, murky tone-setter, it is digestible enough to have the listener aching for more (or immediately turning away, depending on whether you like hearing noises that remind you of the Upside Down) not only because of it’s manageable length, but also its familiar sound cameos, like 808 drum timbres, and industrial synth drones. Of course it does only get more horrifying from here, but what a way to kick it off. Honestly call me pretentious but hearing this opener made me feel so ready to hear three hours more.

Astonishingly enough, though, my favorite tracks are some of the longest ones, with the exception of the exhausting “Buddha Strangled In Vines,” with its hamfisted 80s synth progression which seemed out of place in this context. “April Fool’s Day Aspect Sinister” reveals one of the most dynamic evolutions across its seventeen minutes, while “Chaos-Sex” assaults with probably the most punishing walls of sound I’ve heard all year.
Aside from the ridiculous album titles and my overuse of the word “most,” I really enjoyed this album, despite how uncompromising it may look from the outside. And I’m not sure how to say that. I guess that’s why I opened this review with pondering the term “post-music,” which this new Prurient album comes closest to. It’s weird, it’s scary, and it intrigued me enough to say something. Listen to it?