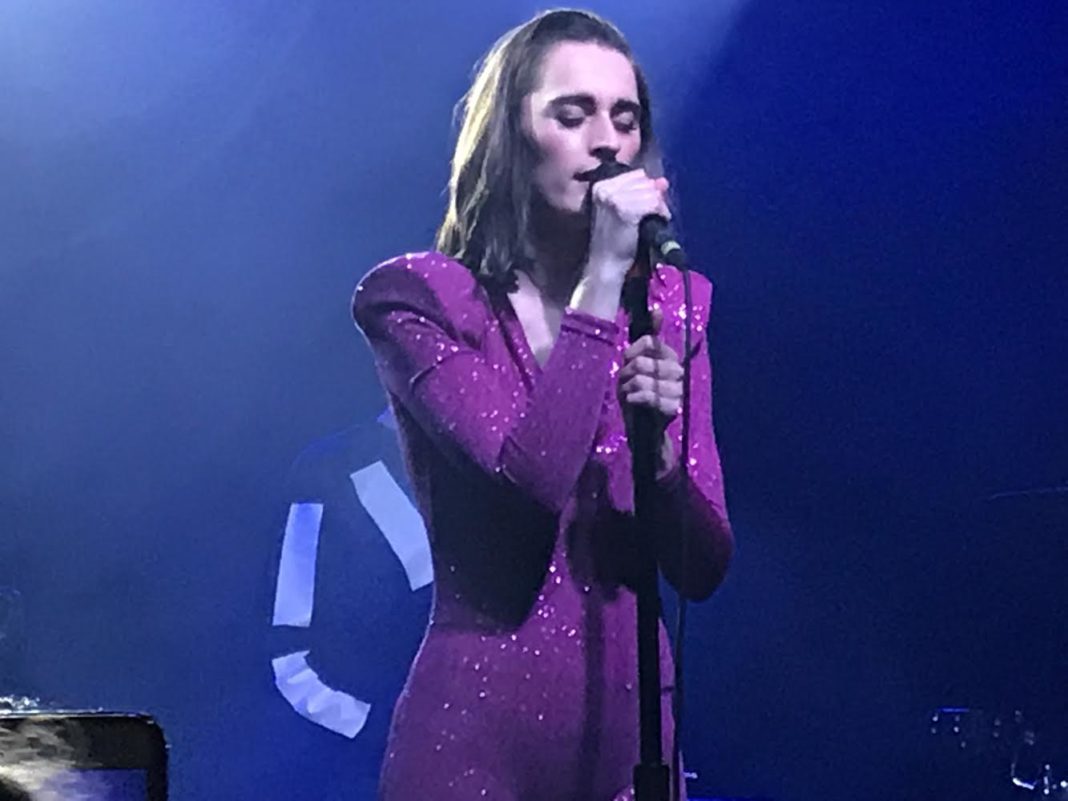 It’s 9:20, and I head to the bathroom after opener DJ Blake Ward’s groovy electronica set ends, forcing myself to try to pee before Yelle’s act.  I’d hate for my bladder to interrupt the experience, forcing me to weave in and out of the crowd.  The Curtain Club’s women’s bathroom is as tiny as a broom closet, and it doesn’t help the limited space situation that the middle stall of the three doesn’t apparently lock—forcing someone on the outside to hold it shut.  Scrolling through my phone mindlessly, I spot in my peripherals a tall brunette with slick, board-straight tresses emerge from the handicap stall.  She dons a white sweatshirt and gray sweatpants—rather comfort-seeking get-up to wear to a concert.

It’s not until I see this mystery woman lift her attention from her hands in the sink to her face in the mirror that I behold who she is: Yelle.

I was stunned that Yelle was out in the public area of the club shortly before her set, using the same bathroom as her fans.  Perhaps it was politeness or timidity or sheer shock that kept anyone in the ladies’ room at that moment from trying to chat with her or ask her for a quick selfie before her performance. Either way, the nonchalance of Yelle using the public bathroom before sweeping her audience away during the rest of the night colored the rest of my concert experience–giving me a peek into how a down-to-earth person could so fluidly transform herself into a punchy pop performer.

French electro pop singer Yelle, or Julie Budet, and her two drummer-DJs GrandMarnier and Franck Richard brought their bouncy, high energy tunes alive for the packed club audience from their very first song until their last, breaking into the concert with 2016 hit single “Ici & Maintentant (Here & Now)”.  Yelle donned a sparkly, skin-tight, long-sleeved magenta bodysuit slightly reminiscent of late Tejana pop star Selena’s iconic bodysuit, while GrandMarnier and Richard were clad in matching black bodysuits with thick white stripes painted down their limbs—serving a minimalist skeletal design.  Throughout the performance, the two drummers stood on opposite sides of the stage symmetrically behind Yelle, striking their electronic drum pads and sharing a pair of cymbals in the middle.  As a trio, Yelle, GrandMarnier and Richard would synchronize their dance moves with punchy choreography that emphasized their costumes’ elongated lines. Yelle took the spotlight, though, with the vivacious energy she channeled through her voice, which resonated well above the DJ’s hard-hitting beats, as well as through her quirky facial expressions and grooves.  She commanded the stage, oscillating between its left and right sides to interact with all sections of her audience.  The trio performed Yelle’s biggest hits—”Ba$$in,” “Completement Fou,” “Je Veux Tu”—and despite the songs being in French, many of us in the audience sang with Yelle (or at least mimicked the sounds of the words).

What I most enjoyed about Yelle’s show was the way she and her drummers wove audience engagement into the fabric of the show—making the music performance seem like it relied on our presence and participation.  In a smaller venue like Curtain Club, Yelle easily engaged and addressed all sections of the audience—reeling us in through interactive games and clap commands.

One of the most memorable instances of audience participation was during Yelle’s last song when the drummers led us through a beat box of sorts. Yelle picked one lucky guy to come onstage and lay the mouth beat down.  He started off strong with the beat, but after a few measures, he lost the rhythm, prompting some laughing and cheering from the audience. Yelle gracefully stepped in, grabbing the mic to bring the beat back and help him find it again.  Ending the show on a simple act of camaraderie, Yelle demonstrated what it is to be a unique and extremely talented international pop star who remains grateful to her fans and humble as an artist who doesn’t take herself too seriously.