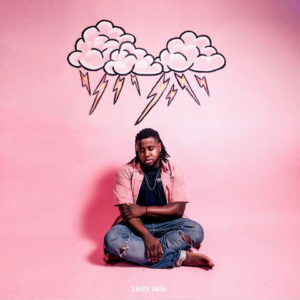 Pink background. Cartoonish clouds with lightning. Xavier Omar looking down in the dumps, cross-legged with his eyes to the ground. Did I mention pink? Already, the aesthetic of the Xavier Omar’s new EP release Pink Lightning is set as trendy, sad, romantic, and young. Age-old setting or the new millennial backdrop? Pink Lightning explores the sort of trap beats that classify 2017, but also reminisces R&B elements that laced the mid-2000’s era with a touch of jazzy acapella elements. With the new EP, Omar doesn’t disappoint with his 5-track release.

Omar admits that his intentions with Pink Lightning was to appease his fans with an end of the year gift, filled with themes of love and genuineness without releasing a whole album. He describes the release as “gentle, yet… grit[ty]” and a true representation of who he is. Omar definitely doesn’t go against his word, as Pink Lightning explores themes of romance from anxiety in the beginning of a relationship (“Change on Me”) to being happy to be cuffed (“Stuck”) to inconsistent love interests (“Runnin’ Round”). The last of which truly stands out in the EP as the 2017-esque song, a bubbly track driven with sexy trap beats.

The EP jumps around in musical theme as much as it jumps around in Omar’s romantic state; from slow jam to pop hit to acapella tune, Omar seems to not be able to pin a staple sound in this release. Omar reveals that the track “The Title” was originally an acapella turned pop song with the intention to get Sam Smith onto the record, but lost files and lost connect lead to the re-recorded result on the EP currently. Omar also noted that the track “Stuck” originally had a slow jam version and a pop version, but the one that made it on the EP was the pop version. All the tracks however have an overlying R&B feel with beautiful harmonies, versatile enough to be listened to in any mood.

Pink Lightning exhibits two tracks featuring different artists, partly in attempt to promote them. “Change on Me” was sent in to Omar by artist Leuca with no intention of getting on the EP, but Omar became inspired and requested that he contributed a verse with him. Omar admits he struggled with the lyrics of his verse, as the theme of the track is the concern of anticipating your significant other doesn’t start to have fading feelings. The verse originally was “too cool”, and was changed to reveal Omar’s honest feelings on how “scrambled up” the situation can make you.

Wild (Remix) is Omar’s remix of Chris LaRocca’s track Wild, which he described as a “connection between the animalistic and primitive nature” in humans that “can come out in relationships”. The friendship started when LaRocca opened for Omar earlier this year. Later in the year, LaRocca showed him his EP Viola, which Omar praised as a “brilliant” EP. The track Wild stood out to him so much that he requested to remix it and release it on Pink Lightning. The track’s theme is about the honeymoon phase in a relationship, complete with a slow sweet melody and lovely R&B harmonies. The remix sounds very beautiful, but unsettling with the slight dissonance in the chord progression. The remix does not sound like a typical remix in the sense of bass drops and electronic rhythms. One could say that the Omar’s rendition is just a different, cleaner, slower version of the original.

Given Omar’s intentions, Pink Lightning serves its purpose. An honest, romantic collection of songs, the EP acts as the perfect end of the year gift. The collaborations with artists Leuca and Chris LaRocca are just icing on the sweet, sensual cake. The release gives its audience the gentleness and strength that exemplifies the vulnerability and confusing attitudes love truly brings.