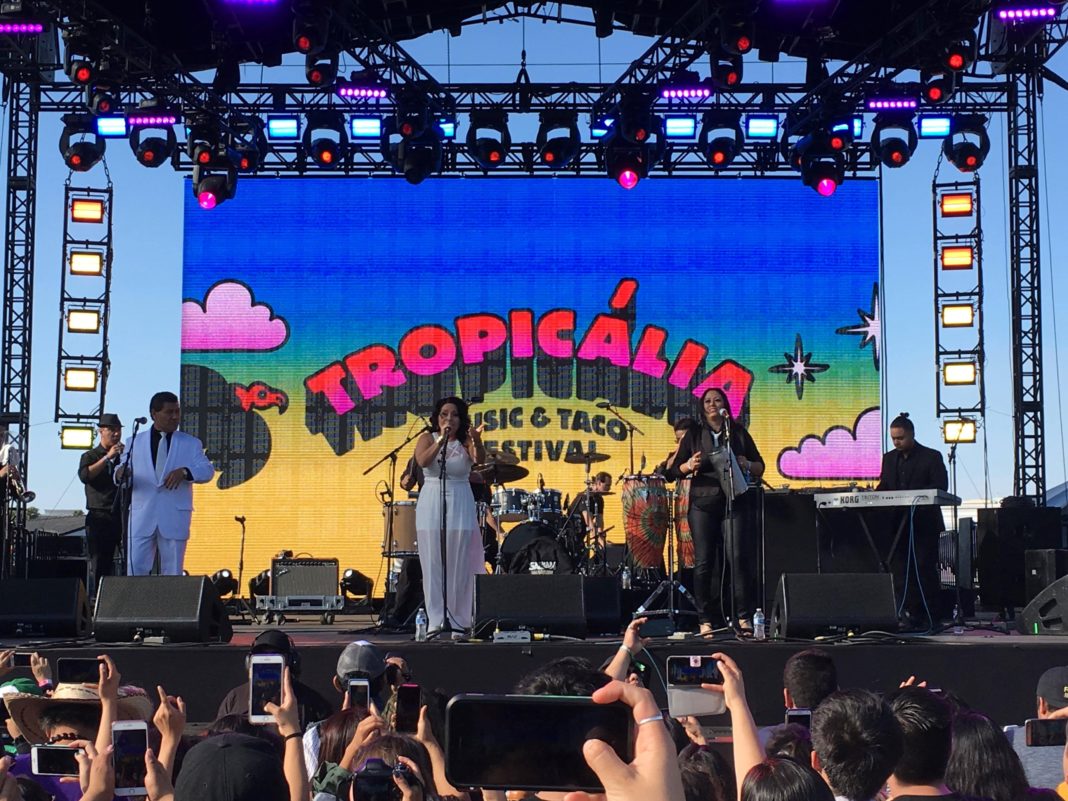 The beach, the beauty, the heat of California all slapped me in the face as soon as I entered the Tropicalia gates. A small- tall Texas girl did not know there where so many beautiful people in this world, especially Long Beach California. There was so much happiness and many different taco scents, which just added to the hype.

As I first arrived, I was welcomed to the sound of La Sonora Dinamita. Which was a big dream come true for me. Margarita la Diosa de la Cumbia, was dressed in all-white, along with the rest of the crew, which resembled angels brought down to earth just for me. They played the best songs, with electric rhythm that made everyone dance. I was especially excited when I first heard my childhood favorite “Sorullo y Capullo” which is a song about a marriage with 8 kids with blond hair and blue eyes, except for a 9th child who is darker than the rest. When confronted, Capullo admitted to her husband, Sorullo, that the 9th child is in fact his only child. Another banger performed was “Oye”, a beautiful song about positivity. I danced like I’ve never danced before, and I can die happy now.

Not yet tired, I decided to see Pity Party, a beach wave band from Los Angeles. I was not expecting a mosh pit, for every festival I have ever attended there has never been one, but boy was I in for a surprise. I lost an earring in the crowd and the worst part is I saw the earring on the ground during the pit and knew it was far gone.I also knew it would soon be over once I saw my cute dream girlfriend, Jeanette, across the lot on the other stage. Jeanette started her set with the catchy, “Por Que te Vas?”, which was perfect, it completely brought the crowd together. Even she was taken aback, and stated “I did not expect to be playing, first of all, at 3:00 PM, or for this many people to show up” She continued on and played bangers, like “El Muchacho De Los Ojos Tristes”, and proved to still be everybody’s dream girlfriend, with a beautiful voice and lyrics to match.  To wrap up her entire set, she introduced the rest of the band, and covered the iconic Nancy Sinatra with “These Boots are Made for Walkin.’” This drove the crowd and my heart wild! Thank you so much Jeanette for the most beautiful show, your biggest fan- Carla Lara.

After Jeanette, my friends and I hurried to the Mota Stage, to catch a glimpse of Inner Wave. Inner Wave is from Los Angeles, California and started their set at 3:30pm sharp with a decently sized crowd. Everyone in the crowd was so pretty, young, hip, and probably smoked a lot of American Spirits, just like the first song they played. The crowd did not mosh, as I expected, it was more like a pushy sway which went perfect with the mood Inner Wave established. I was a bit sad, when the set ended and they did not perform “1 4 2,” but overall the performance was great.

We decided to try the free tacos. Tropicalia was set up so that all the free taco tents were in one courtyard. There were about 12-15 taco tents all with lines of people. Which was understandable, the fest did sell out. I ordered 3 tacos de pastor, and 1 de asada. They gave you one lemon. The tacos were just alright.

The amount of people in Queen Mary Park became evident to me when Cafe Tacvba started to perform. With at least 1500 people cheering them on, the lead singer, Ruben Albarran, brought a lot of energy to the stage. They played many hits including, “La Ingrata,” “Las Flores,” “Como te Extrano,” and “Eres.” The band paid homage to all the students in the world and to the 43 missing in Ayotzinapa during the performance.

Next, at the same stage, we saw King Krule and just like magic the entire crowd shifted from one to another; a sea of cuffed pants. King Krule performed hits from his new album and old songs as well. These songs included “Baby Blue,” and “Biscuit Town.” King Krule’s performance was especially beautiful, the lighting and atmosphere matched the music. This was so welcoming to Kali Uchis’ performance. Kali Uchi’s covered the iconic “Sabor a Mi,” which brought the crowd to awe, for it was both beautifully sung and performed. Chicano Batman came on afterwards, with an overall beautiful performance. Overall, Tropicalia was a huge success- it even sold out! This type of festival is just what we needed to fully embrace our latinx heritage, as well as american roots. I will forever cherish it in my heart and hope for more Tropicalias to come!