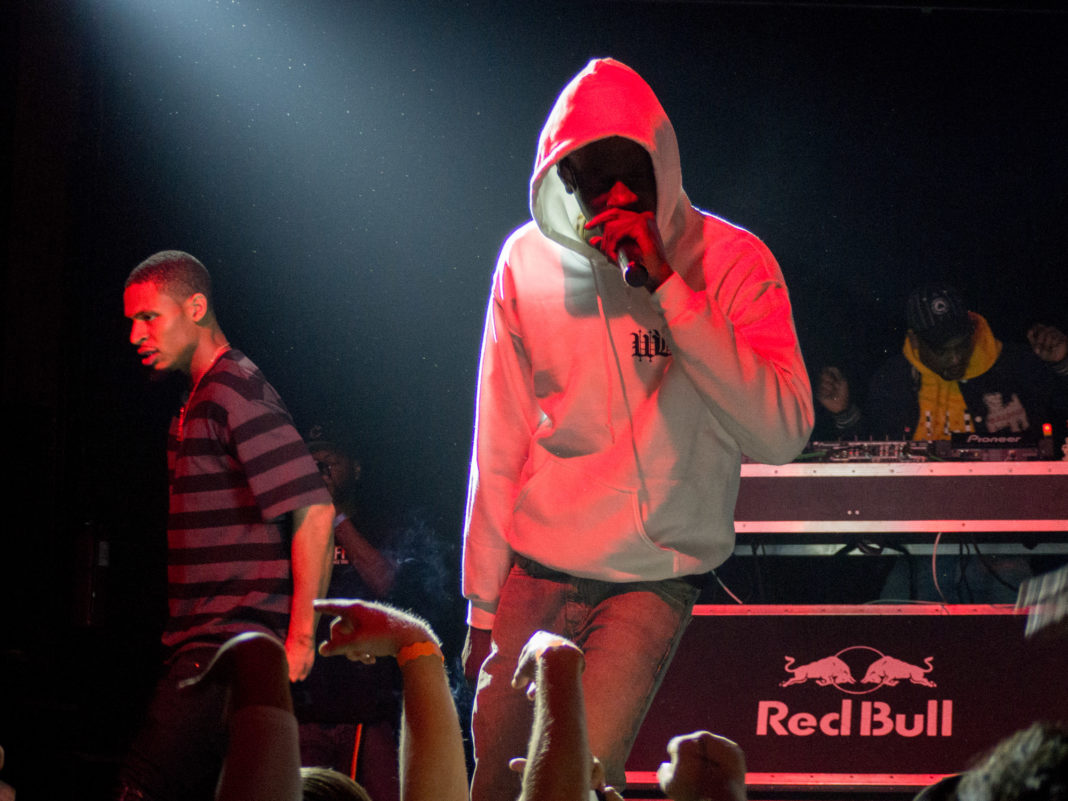 I walked into trees about half an hour after the doors opened, and was surprised at how empty it was. I figured it was just because it was early, and expected a lot more people to file in through the night. I was correct to an extent, but at the end of the night the audience was still pretty small, and I was thoroughly surprised. I knew The Underachievers weren’t very popular, but I still expected a larger turnout. Nevertheless, the show was superb.

The rap trio Warm Brew were one of the openers, and they were surprisingly energetic. Given the small turnout they struggled a little bit to get any real feedback from them, but they didn’t let that slow them down. They were running and jumping all around the stage, and Manu Li kept busting out dance moves during his verses. At one point they got the crowd to open a pit, which resulted in about as much moshing as you would expect out of a group that small. Injury Reserve is another hip-hop trio consisting of two rappers, Ritchie with a T and Stepa J. Groggs, and their producer, Parker Corey. They’ve been receiving a lot of praise for their innovative sound, but I was blown away by their performance. When they first came out, the lights were dim, Stepa hiding in the shadows, and Ritchie sneakily crouching down, only to jump up once the lights came back on and the music dropped. They performed with a lot of intensity, getting really aggressive during tracks such as “Boom (X3)” from their latest EP, Drive It Like It’s Stolen, which their setlist pulled a lot of cuts from. Before going into “Boom (X3),” Parker jumped down into the audience, inciting a mosh pit before leaping back on stage. The lighting was dim for the most part, with only a few colored lights illuminating them directly. This made photographing them challenging, but led to a really sinister tone to their performance, but it also created a very somber atmosphere during tracks such as “North Pole.” During this song, Ritchie and Stepa both became visibly grim, displaying the emotions from which “North Pole” was created. After their time was up, they announced that they’d be at the merch table, so me and my friends swung by and had the chance to tell them how strong their set was, and take a picture with them. A short intermission later, and The Underachievers took the stage.

Their DJ came out first and got some hype going before The Underachievers walked up onstage, nonchalantly performing their first song. Their setlist spanned a sizable portion of their discography, including Indigoism and their most recent release, Renaissance. Unfortunately, I got too excited during Injury Reserve, and foolishly ran out of memory space on my SD card and was unable to photograph most of their set. However, it was solid, and they did not disappoint. The biggest takeaway I got from this concert was just how underrated these two hip-hop groups are. Both Injury Reserve and The Underachievers have started garnering more attention after their latest releases, but I think they are deserving of much more. Hopefully they get more shine after their next releases, and I hope to see a much bigger turnout at their next shows.