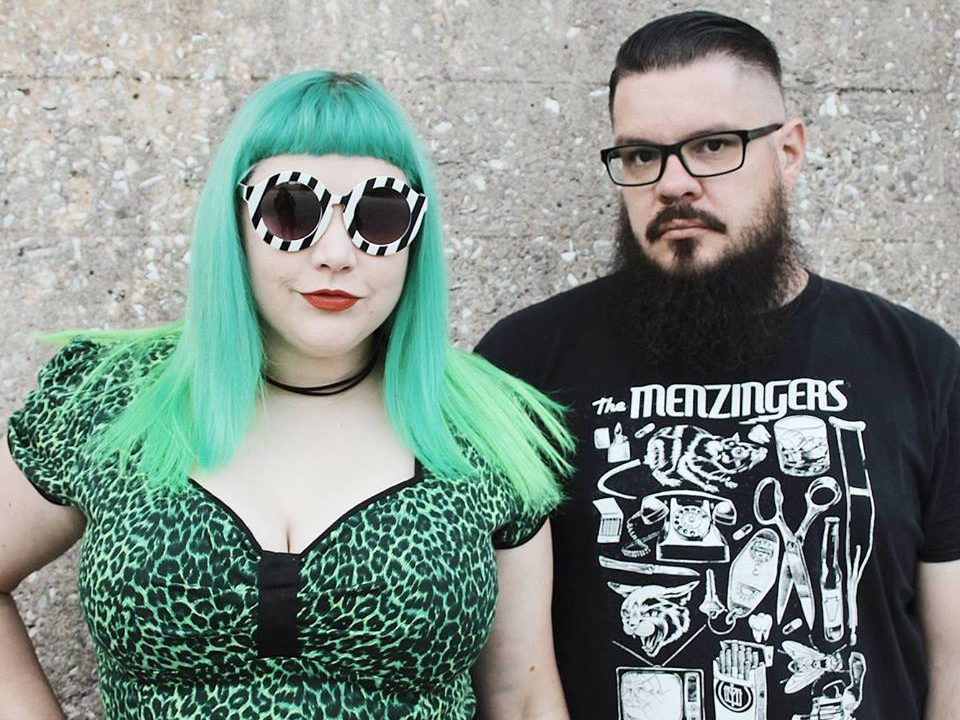 St. Louis, Missouri’s very own Bruiser Queen finished off their latest tour in none other than Dallas, Texas. Radio UTD got the chance to chat with Jason Potter (drummer and vocalist) about their soon-to-release album Heavy High, their songwriting process, and the new biosphere of life on tour.

Radio UTD: How is this release different from your previous works?
Jason: I would say most readily the production work on it. In the past, we sort of went for a lo-fi sort of garage-y sound. Now we wanted a tighter, more go-ready polished sound. So, we finished a few things off in a way we wouldn’t have in the past.

Radio UTD: Would you say that this more polished sound contributes to a certain theme that ties Heavy High together?

Jason: I know one thing that we weren’t happy with our past releases was that we wanted to be more cohesive. This album certainly is. Going into this one, we had a lot more to choose from in terms of songs that we’ve written, so we were able to pull together a sound that flowed together the most. It sort of loosely follows a party vibe, which starts off as a lot of fun and by the end, it sticks out and in the morning, everyone is sitting out on the porch. It plays into more of a cohesive vibe with a very fun night.

Radio UTD: That’s really interesting how you kind of put a story of a night into it. So what is the most special song to your hearts that you will share on Heavy High?

Jason: Good question. Well, the first two singles, the first one is called “Have Fun” and the other one is called “Sugar High.” Those for us kind of encapsulate our band. Even though sometimes there is a lot of hardships and you have to remember to keep your head up, keep trying to fight a good fight. If you keep on playing music, eventually everything is going to work out. I think that’s why those are the most heartfelt songs.

Radio UTD: That’s a really good meaning because I know typically heartfelt songs are about special events or romances, but your songs take on another strong message.

Radio UTD: Other than musical influences, are there other types of art or life experiences that inspired certain tracks in this upcoming album?

Jason: That’s a good question. I would say something that is a big factor, and people who have been listening to us for a while might know, is definitely travel. You know, what we’re doing right now is touring, which is related to music, but with different cultures and food, experiencing life the way different people do it across the country. So, definitely travelling factors in a lot. Morgan and I are both into photography and drawing and stuff like that, but meeting new people and different experiences also factor in big to how we go about our songwriting.

Radio UTD: Talking about songwriting, how would you describe each of your songwriting processes? How do you work together when making a song?

Jason: Yeah, right on. Morgan is our singer and guitar player. She’s got such a gift for melody and structure, so a lot of the times most of our songs start with her having a little bit of an idea. Sometimes she would sort of sing something into her phone or computer. She’s got a lot of voice memos and phone notes, which are usually our song starters. And then she’ll send them over to me and I’ll have some ideas for song structure or I’ll add in more parts. Then we come together, and it becomes a big huge song. Or she’ll have a chorus or a couple lines or a riff and then we flesh it out together. She’s always got really cool ideas for our songs.

Radio UTD: It’s known that often times songwriting can be tough when there’s a writer’s block. What are some ways you and Morgan take a break from music and refresh the creative juices?

Jason: Well, we have a bunch of different jobs. We have types of jobs that let us tour. So when we’re at home, Morgan would usually do merch for different bands. A band will come in to town and need somebody to sell merchandise for them, sort of like we do, so she’ll work for them. Me, I’m a stagehand, so I work in concert production, too. I think that’s kind of a neat thing that allows us to be involved in the music process without directly being involved in it, so we’re still around that creative process. Without the whole weight being on our shoulders to come up with something, we get to watch other people do it!

Radio UTD: That’s really interesting. It’s like you’re never exactly going away from your own music.

Jason: Right, totally because we’re sort of writing all the time and coming up with ideas. Something like a writer’s block, we avoid it by always working on music at least a little bit. So, when we put out a new album, it’s not like we’re running out of ideas, you know, because we have a bunch of idea starters from our experiences.

Radio UTD: Talking on a personal level, from the time of your last big album or EP release, how do you think you changed from then?

Jason: We put out our last full-length album in 2012, I think it was. Without going into the whole story, we had a little bit of a record deal and a local label, who ended up folding. We weren’t exactly soul searching so to speak, but we were kind of out there for a little bit. We put out a couple EPs and demo tapes just to see where we were anymore and where our sound was. So for this new album, it really started out as a collection of demos. I think the real cool turning point was when we finally found our direction. We were like, “Oh these songs – this is who we are. This is what we’re about.” I think we really took a hard turn in that direction. In our EPs, we were experimenting a little more.

Radio UTD: So would you say this new album is less experimental?

Jason: Yeah, the cool thing about putting out EPs or singles is that we get to experiment and try all kinds of different things. I’m not our singer, but we put out a 7” single where I sing two songs on there. You know, just experimenting with different things and see what we like. By the time we were making this record, it was like “Ok, we tried a bunch of different things. Now, let’s pull it together and focus in on exactly what we want this time.

Radio UTD: That’s awesome! Also, if I’m not mistaken, you are nearing the end of your tour. Do you feel like you learned anything new that will affect your music or careers?

Jason: Yes, totally, for sure. We’ve been out six weeks and it would be concerning for us if we hadn’t learned anything, even some of the basic things about travel. Let’s say you went out on a family vacation, you don’t really get into the nitty gritty of things. But it’s different living in a van and trying to figure out how to sustain yourselves without your home, where I do all my design work for all our shirts. But I’m away from the computer for six weeks and basically away from everything. So it’s a huge challenge how to keep your life going.

Radio UTD: Right, right. From what I’ve heard, touring is like a totally different world.

Jason: Totally. It’s kind of become its own biosphere. We’ve been a band for seven years and we’ve been touring a lot for the last four to five years, which we learned a lot of little things along the way. But this one was kind of the theme of the whole album. It’s like putting together all the things we’ve learned and putting the experiences into practice. And things don’t always pan out. We need to eat healthier on the road and we started doing that, but slowly it becomes more fast food and junk food because you don’t have a lot of time. But you know, we’re always trying to fine tune. We love playing in the west coast and down south, so it has given us a new perspective on what other people see in things. Personally, I like talking to other people in different cities and shows, seeing what their town is like. If you get stuck in your own city, your own little place for too long, you tend to lose perspective. It’s good to see what everyone else is up to.

Radio UTD: During this tour, do you think you and Morgan take on different personas when you songwrite versus when you’re performing on stage?

Jason: We totally do! We kind of joke about it, too. Not much for me, but more for Morgan, she kind of becomes Bruiser Queen whenever we play. You know, she puts her foot up on my kick drum and she’ll do a bunch of rock’n’roll moves that she’s not going to do in her daily life. I’m way more outspoken on stage. Between singing or the different things we talk about on stage, it’s totally this thing that sleeps on the back of us until it’s time to get out there on stage and do it. I think most people that would be hanging around the room with us wouldn’t expect those same people to be doing that.

Radio UTD: Interesting! So if Morgan is Bruiser Queen, does that make you Bruiser King?

Jason: Oh yea, we joke all the time because people would be like, “Are you Bruiser and she’s Queen?” And we’d both give them a side look and she’s like, “I’m Bruiser.” It’s funny because we’re just two people in the band, so we gotta keep it interesting somehow!

Radio UTD: Well, thank you so much for your time and letting us interview you! We are very excited for Heavy High to release!

Jason: Thank you so much for having us!