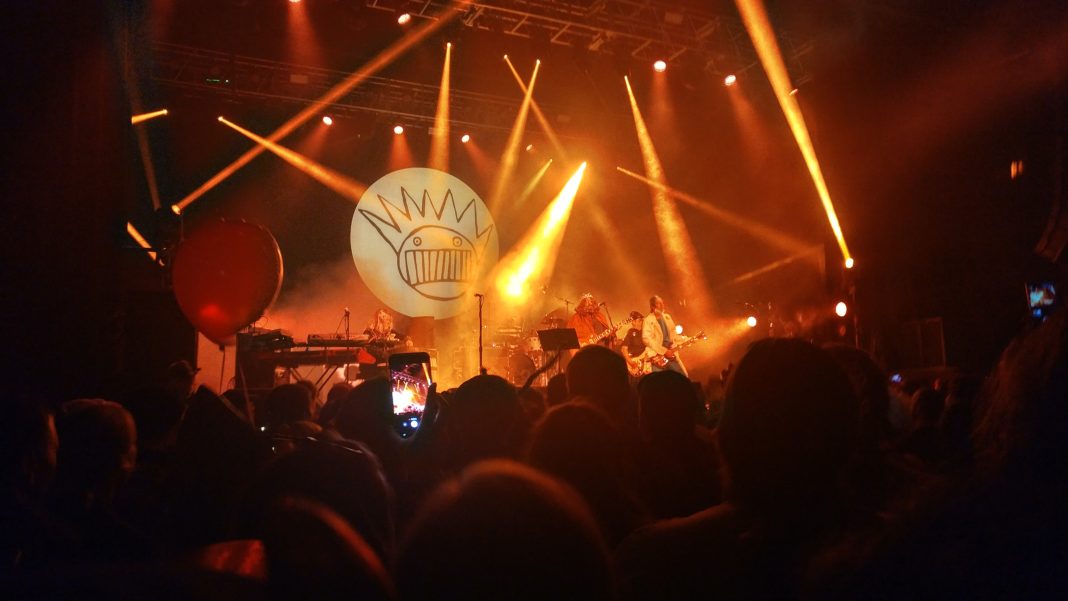 Sure in the past I may have just thrown a party with a few friends, but Ween on Halloween had been something that just seemed way too enticing to pass up. I figured that I’ve listened to them enough to warrant seeing them live, and they are notorious for putting on a good show, so I decided to go ahead and go for it! The Bomb Factory seemed like a good enough venue for this as fans could get up close and intimate with the set if they would like, or take a step back and enjoy from afar.

Most of us anticipated an opener (there was one on the bill), but a wave of surprise washed over the crowd as the costume-clad Ween took the stage shortly after 9 and started up their set. Starting off with The Golden Eel from the Mollusk, Ween showcased that tonight was going to be a long night with many songs and many great solos. One thing Ween is known for is changing up their setlist quite a bit, most people I would talk to only really know about Ocean Man, but Ween has quite a lineup of music they could play. With songs like “Spinal Meningitis”, and “The Stallion pt. 1” making up the earlier part of the set, it seems like Ween wanted to get right into the weird and fun stuff. The Stallion itself was an interesting track to hear because it laid the groundwork for how their live work differs from their studio releases. The Pod as an album is one where most of the songs sound almost sickly as it was mostly recorded when the Ween brothers had mono. Considering that it’s been about 26 years, they probably weren’t sick anymore, so most of the songs had a new wave of energy to them that wasn’t captured in the studio releases. Gene Ween was also very capable of pumping out the stranger voices rather well despite a good amount of time passing which was really cool to see. Throughout the first half of the set, Ween seemed to jump back and forth from album to album while sticking with Chocolate & Cheese as a base for most of the songs. Some of the rarer things came out once in a while, with Ween even playing “Beacon Light,”  a song that they made for the X-Files soundtrack!

The crowd was enjoying the show thoroughly, with most of the attendance being rather good fans who even dressed up for the show. In between each song, Ween usually broke down into some sort of instrumental that was never quite consistent. From breaking into guitar solo noodling, to putting out heavy riffs that would almost make me think I was at a Sleep show, Ween had a lot to put out. As these breaks went on, I started noticing that the band members on stage were pretty much just holding conversations, or enjoying a cigarette while most of these breaks went on. Their banter with the crowd was rather minimal (Gene pretended for a moment that he forgot he was in Dallas), and most of the interaction with the crowd was just dropping the track title. As the set went further on and on, the crowd started to get more energetic. This was most noticeable from their transition of a Jimi Hendrix cover to “Dr. Rock”. Playing a version of “Dr. Rock” that almost doubled the tempo of the studio version, the crowd was washed over with a noticeable wave of energy. Another great note about this part was that the base had swapped from Chocolate & Cheese to albums like GodWeenSatan, and Pure Guava. The clean energy that was dished out earlier had suddenly got a lot more messy with tracks like “Don’t Laugh (I Love You)” holding the seams together in between. A couple of fans in the crowd yelled for Ween to play “Pollo Asado,” and at that point I wouldn’t have been surprised if they had. Keeping up with the show was an experience considering that their music hops across so many genres. Considering that they have a lineup of many albums, this would make sense as their sound develops over time, but their albums don’t even have that consistent of a sound on their own.

When a band can dish out many different sounds, It leaves some high expectations for how they can mess with the audience. After playing “You Fucked Up” and a couple of other older songs, they unleashed a cover of Motorhead’s “Ace Of Spades” before stepping out and leaving the stage. Most of the crowd found it hilarious, but was in disbelief that they would end it there. After some scattered chants, Ween came back on stage for a couple of more songs. “Play some more Motorhead!” a few people yelled, I was cautious with words like that because they might have ended up coming true. Now’s a good time to mention that Ween had a country album, because “I’m Holding You” popped up in the encore which made for a perfect song to sway to after two and a half hours of Ween. For the final song, the best surprise that they could possibly unleash is “Buenas Tardes Amigo”, which is just an amazing piece to end a set on (and a fantastic story that unfolds in the song). Ween had been on stage playing for just under three hours, and I couldn’t name many bands I’d hang around that long to see. Ween put on an amazing show that engaged the crowd, and they had some extra fun to share with us for Halloween.

P.S. they didn’t play Ocean Man which is always a plus.