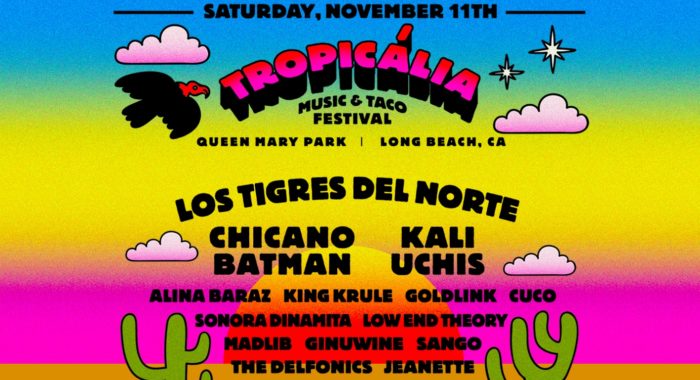 This year will be the very first Tropicalia Music and Taco Festival, it will take place at Queen Mary Park in Long Beach, California. I, Carla Lara, from 502 OVERLOAD, have the great opportunity to attend it! The inclusion of artists such as Los Tigres Del Norte and Kali Uchis are an affirmation of our total latinx identity. These are the artists we woke up to on Sunday mornings when momma was on a cleaning binge. This festival is a combination of generations; an acknowledgement of the inspiration behind today’s current revival of chicanx pride. With a phenomenal line up, which is the perfect mix of mainstream and underground music. Headlining Los Tigres del Norte, which are one of the most influential artists of the latinx community, speaking realities of the different sides of the border.

There will be all you can eat tacos until 4PM, so come on an empty stomach folk, I sure am. Curated by, 4-star google rated, Carnitas el Momo, Mariscos Jalisco, Burritos la Palma, and many more! There will be a large variety, from tacos de pastor, fajita, and even veggie tacos. I have never been to a festival that, first of all, offers food cheaper than 10 dollar fries, but free? Sounds like a freakin’ dream come true.

Other more traditionally inclined music events include, the alternative rock Cafe Tacvba, who were only announced 3 weeks before the day of the show. The intricacy and popularity of Cafe Tacvba meshes perfectly with the entire vibe of Tropicalia. Another headliner is King Krule, who just released his new album, The OOZ. This is especially exciting, since now there will be enough time to memorize all of the lyrics and truthfully say “I love King Krule, he is so hot” without retribution. It isn’t all singer and rock music, there will be the beautiful, the wonderful, the amazing, La Sonora Dinamita. I personally always wanted a quinceañera for the sole purpose of dancing cumbias to La Sonora Dinamita, but I am 19 and this will be the closest I will get to it. Score, still. Another super exciting act is Jeanette, who is in fact one of my favorite vocalists, her dreamy performance of “El Muchacho de los Ojos Tristes” will be breathtaking. I am excited to see her perform after almost 20 years of her musical peak.

The diversity of the festival is the most perfectly picked I will ever had the pleasure of attending. From rockabilly queen Wanda Jackson, to modern rap performances, Ivy Queen, and Ginuwine, Tropicalia, will be one of the most inclusive fests of the year. Don’t worry if you are not 18, the event is all ages, so you get to see other California-based artists, which include, Chicano Batman, Kali Uchis, Cuco, The Buttertones, Las Cafeteras, and Innerwave.

Tropicalia will take place on November 11th, 2017, their general admission is from $75- $95, there are also VIP bundles ranging from $150-$500. It will also be hosted by the comedian Felipe Esparza.

Check out the official line up, and spotify playlist here: