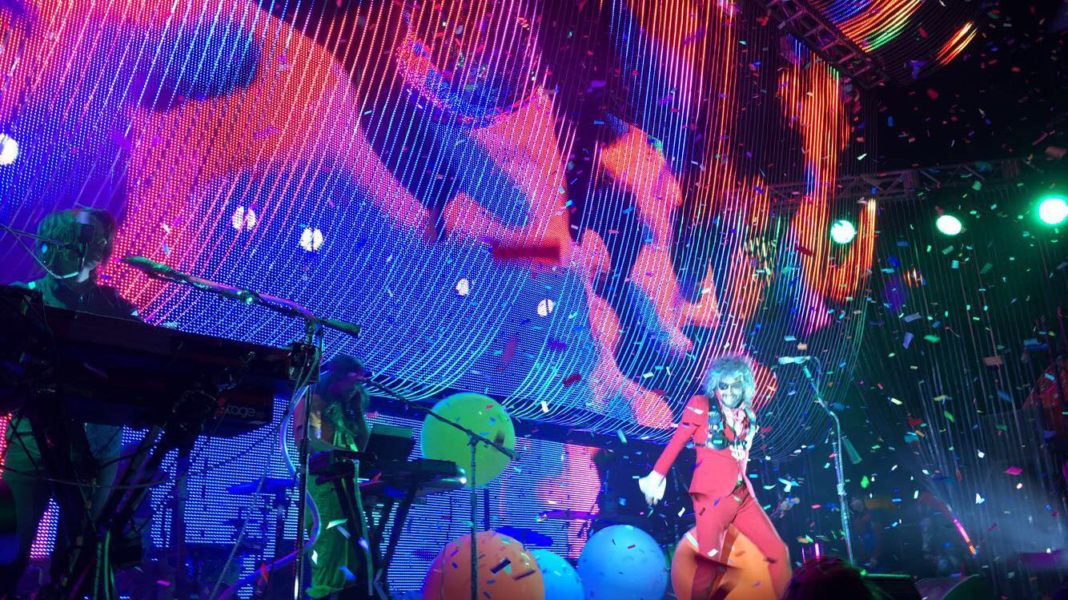 Okay, let’s admit it; every person has played the “which act is this person here for” game at some point or another. Whether it be age or the cigarette butts scattered around the venue, it was extremely clear who was here for which artist.  One almost has to wonder how The Flaming Lips and Mac Demarco came together for such a tour, and when you stack an opener like The Garden on top of that, it seems all too specific a brand of eccentricates. The more you think about it, however, the more the lineup makes sense and melds into a celebration of and being completely, unequivocally your own strange self and loving every single instance of it.

Anyone who has seen The Garden twins knows what a treat they’re in for; the audience gasped multiple times throughout their high energy set which included handstands and jumping jacks. To my astonishment, there was almost no movement from the audience which seemed enthralled by their complete takeover of the stage as their personal playground. As the twins disappeared, whispers of “I gotta look these guys up” ran about the audience. In the meantime, Mac DeMarco had posted his phone number on Snapchat and a few lucky fans to our left began Facetiming him. The atmosphere was set (and significantly smoggy enough) for Mac’s grand entrance. Although under the weather, Mac didn’t let that stop him from antics such as slapping his butt in front of the cameraman, a long shtick in Italian, multiple mouth on mouth kisses with a bandmate, and heavy drinking. Two fans were lucky enough to perform on stage with DeMarco, performing a softer, sweeter version of “My Kind of Woman” on drums, and “The Stars Keep On Calling My Name” on guitar. After a lot of screaming and a lot of requests for Mac’s socks, a long line of fans hustled out of the arena while a few caped men prepared the stage for The Flaming Lips.

The Flaming Lips are legends for a reason ­– my heart has rarely swelled like it did in the first moments of their colorful, laser and disco ball-filled set, which immediately shot balloons and confetti out into the crowd. It only got more beautiful from there, with a giant inflatable pink robot to accompany “Yoshimi Battles the Pink Robots” and a multicolor light up unicorn which front man Wayne Coyne rode through the crowd on during “There Should Be Unicorns.”

Naturally, there was also his signature hamster ball which he rode on top of the crowd during a “Space Oddity” cover. Flashes of the word “love” post “A Spoonful Weighs a Ton” made me want to go and tell a stranger I love them. It was a true spectacle of love, joy, and all things colorful and beautiful.

If you have the opportunity to see them live, please do it. It is one of the most raw experiences of happiness I have experienced. The Flaming Lips show inspired me to go into the world and love better and more wholly, and I think that’s exactly what a live experience should be about, something so moving it feels like a change is coming. In such a tumultuous time, the Lips remind us that it is always more powerful to choose love.