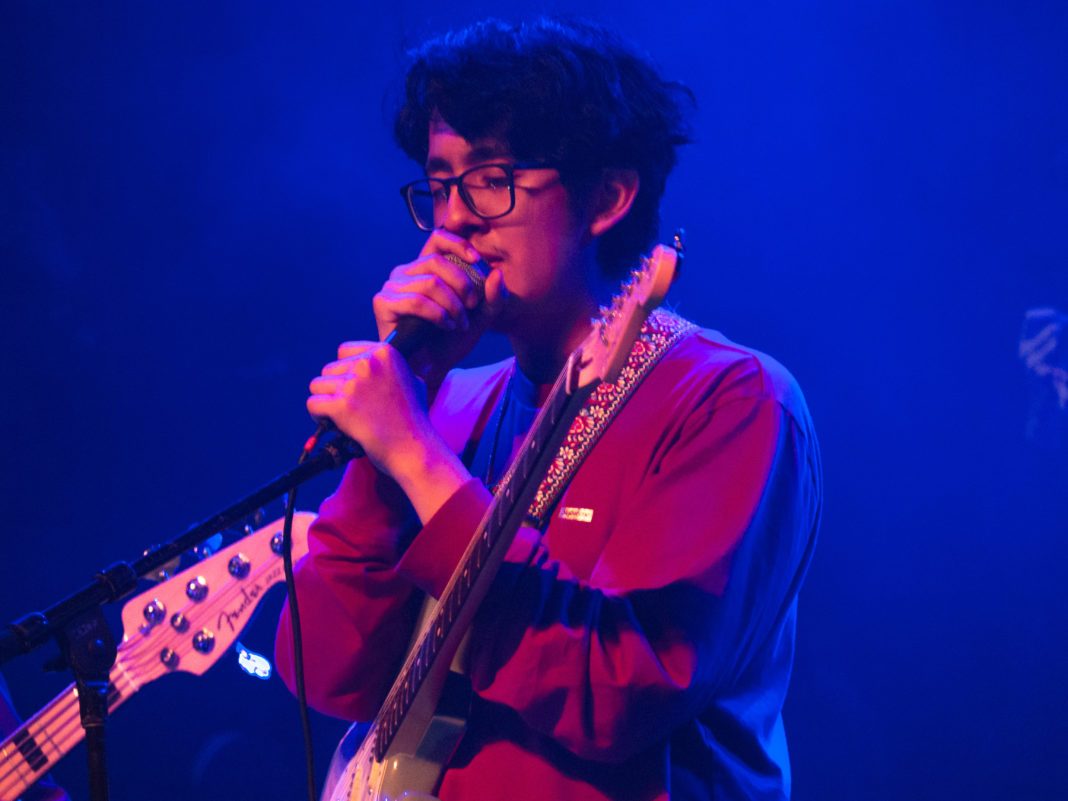 I discovered Cuco earlier this year when his latest release, Songs4u, started to pop up all over my twitter feed. Many of the people I follow were retweeting it and talking about it, so I checked it out to see what all the fuss was about. I immediately fell in love with it, and became a huge fan of him.

For those unfamiliar with Cuco, he’s a 19-year-old chicano artist from Hawthorne, California, who’s seen an explosive amount of growth this year. Just last year he only had 4,000 twitter followers, and as of the writing of this review, he has over 53,000. At the beginning of this year he was only playing local house shows in his area, and I thought it would be a long time before he would ever come to Texas. Yet, here we are less than a year after, and one of the stops on his short, Texas-centered tour was Dallas.

Usually DJ’s that play before the show starts are not very memorable, but tonight this was not the case. He knew his audience well, playing hits such as “Tragos De Amargo Licor,” and “Bidi Bidi Bom Bom,” both of which had the entire venue singing along. After these two tracks, I knew that tonight was going to be memorable. J-kwe$t was the official opener, and was joined by a DJ named aicrum daniel, who played a few of his own songs before J-kwe$t came out. It’s very rare for an opener to have the ability to control a crowd and get them hyped, especially when their music is way different from the headliner. I will admit that I completely underestimated J-kwe$t and was pleasantly surprised when I saw tons of hands in the air, jumping, and moshing after he warmed up a bit. Cuco made a quick appearance for a song before heading backstage again, which only served to excite the crowd even more. Following that intensity was SHIDÜ, which mellowed things out nicely. SHIDÜ is a band of three members who play songs and instrumentals with a variety of influences, including indie-rock, jazz, and hip-hop. After their set, they also play with Cuco. Something that caught me by surprise was that the drummer is also the singer on several of their tracks, which was impressive. Throughout their set they played a lot of varying songs from their own releases, unreleased tracks, and even a cover of “PRIDE.” by Kendrick Lamar. After a short intermission, SHIDÜ came back up on stage, this time joined by Cuco, playing a guitar of his own. They opened with an instrumental track before finally greeting the audience. Hearing the live arrangements of his songs added a whole new dimension to his music, especially considering most of his work is done digitally. He played all his biggest hits, starting with “One and Only,” but it was at a higher tempo, which changed the dynamic of the track a lot. It went from feeling like a solemn longing for someone, to an excited declaration of love. Cuco also displayed his musicianship, switching between playing guitar and a synth. Normally he would also play trumpet, but unfortunately something was wrong with it, and as he put it: “my shit fucked up.” He apologized for not being able to play, and although the crowd was a little disappointed at the circumstances, it wasn’t a big deal. Cuco played a fantastic show, he’s a good performer despite being a relatively new artist. Obviously, he’s not perfect, but he’s slowly getting more and more experience, and I have no doubt that he will master performing in no time. However, a big part of what made the show so good, was the crowd. The crowd is the most important element that pushes a good performance, to a great concert.

Everyone was involved and invested in the show, a sea of phones desperately trying to document the night. The crowd was mostly made up of latinx’s, in a wide-range of age groups, and it was clear that many of them, including myself, look up to Cuco. He’s a completely independent artist that has a strong DIY attitude, and that couldn’t be made any clearer. He’s touring with friends in a van with a small trailer hitched to it for all their equipment, supporting each other at every stop.

Seeing a young artist I can relate to such as Cuco go from doing small house shows in southern California, to selling out RBC, upgrading venues to Trees, and selling that out as well is incredibly impressive. Watching him pour his heart out on stage and start to live out his dreams is not only heartwarming, but inspiring.