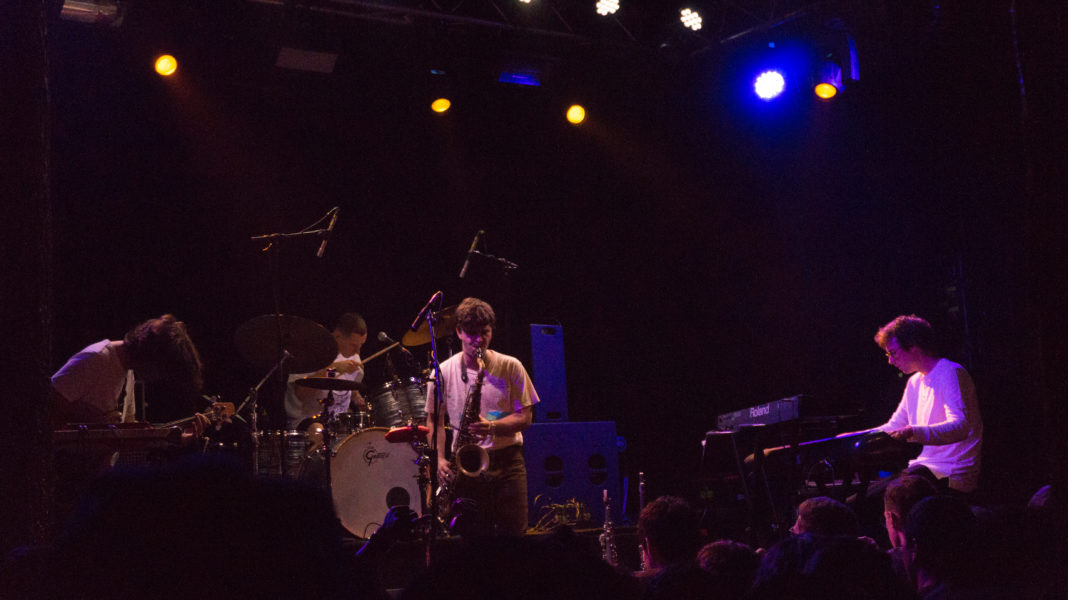 People came out of the woodwork after sleeping on tickets to the BADBADNOTGOOD show at Trees last night for months. Openers Cure for Paranoia weren’t notified that they were opening this show until 2:00PM the day of the show, but their soul-tinged hip-hop was a nice way to begin the evening. Rapper Cameron McCloud’s impeccable flow was unwavering even when the beat would drop from under him, keeping perfectly in time in rests triggered by the group’s producers Jay Analog and Tomahawk Jonez. Although they put on a great show, which the majority of the audience appreciated, a portion of the crowd right in front of the stage were staring down the performers. Regardless, Cure for Paranoia received a large round of applause once they finished their solid set.

Waiting for the clock to strike exactly 10, BADBADNOTGOOD energetically hoped out on stage with gusto. Alex Sowinski, drums, thanked the audience and then went straight into “Triangle.” James Hill filling in on piano for the past couple of tours was a nice fit. His phrasing was distinctly different from the regular pianist, Matt Tavares, in a way that brought a new perspective to some songs that they’ve played for a while. Sticking to tracks only from their past two albums, III and IV, was a smart decision on the part of the performers as they are their first two albums consisting of only original compositions.

With their steady and well-earned, BADBADNOTGOOD’s fusion of hip-hop, jazz, soul, and punk have garnered them a very loyal fan base over the years after 4 full length releases, and 2 live albums. They have veered away from performing well-developed covers of modern standards from all walks of music after becoming more confident in their ability to compose and produce their own material, and their progression as both musicians and producers has been praised by fans.

The audience responded in roars of applause whenever they would recognize an introduction of one of their song. Cuts like “Confessions Pt. II,” “CS60,” “Lavender,” a reworked “Kaleidoscope,” and the encore “IV” received extremely positive responses from the audience. Slower tunes like “Chompy’s Paradise” allowed the crowd to vibe with the band without letting any of the energy go to waste. Chester Hansen’s solo, bass, were amazing as always as are his bass parts. Even though they have added a fourth member to their band, Leland Whitty on woodwinds, auxiliary percussion, and guitar, Chester Hansen’s bass playing still fills many sonic roles. Although they’ve been performing as a group since 2011, they left the stage with such humbleness and respect for their audience after a mass group photo with their audience as it was their first time playing in Dallas.​