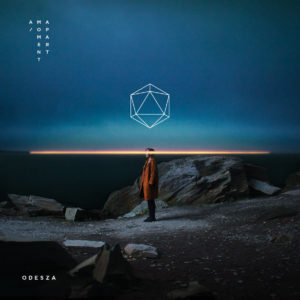 After a much awaited 3 year gap, Odesza has release their third studio album, A Moment Apart. Their previous release, In Return, led the duo into a three year headlining world tour, creating a name for themselves with their exotic, dreamlike, airy-vocaled electronic sound. During these three years they expanded on their brand by forming the Foreign Family Collective, a group of similar artists all finding their own way to mix the theme of euphoria in their beats, comprised of artists Rufus Du Sol, Jai Wolf, Kasbo, and Big Wild. Despite their lack of studio releases, Odesza remained wildly relevant, because In Return was unlike anything that was being released at the time and their NO.SLEEP mixes that they would release on Soundcloud helped keep the stans alive. It is without a doubt that Odesza will remain as popular as they have, but A Moment Apart falls short of expectation.

Despite the title track sounding like traditional Odesza, it also showcases their shift in style for this album by opting for an impressively orchestral mix of violins, organs, drums, and vocals. “Higher Ground” ft Naomi Wild, a heavily percussive song that pairs well with the soprano vocals giving the song depth, and keeping it from sounding like radio pop. The third song on the project, “Boy,” strays slightly from the more acoustic sound found in the first two tracks, and more reminiscent of Flume..

The transition between “Boy” and “Line of Sight” is pretty abrupt, as the album switches from the heavily emotive, and slightly unstable ending of “Boy,” to the soft’n low intro sound in “Line of Sight.” The first four songs are an incredible showcase of how their music is less synthesizers, but rather the synthesis of symphony and sonant, without a doubt the strongest portion of the album.

Although the album sounds more like “suburban america” than the previous two, there is an air of simplicity and pause that is weaved throughout this album, opting for simple layering. “Late Night,” one of their singles, has more of a rock influence, layering a bass and an acoustic electric guitar, using the latters subtleties and vocals that alternate between two high notes to be the driving force throughout the course of the track. The volume does not vary loudly between the “high points” of the song, opting for pauses as their “drops” creates a song whose intent is not lost in the musicality, and makes a perfect song to listen to on a late night car ride.

The collaborations within this album are a deviation from their own voice, and Odesza seems to be taking the back seat and letting the artists’ sound take first chair. Odesza had been pining for a collab with DFW native Leon Bridges, accomplishing that goal through “Across the Room,” a love song that stays true to Bridges’ old school sound. Odesza managed to show their adaptability letting Bridge’s talents shine through rather than sampling his voice and making it adapt to their sound.

This approach is shown more prominently in the trio of back to back features being “Everything at Your Feet” ft. The Chamanas, “Just a Memory” ft. Regina Spektor, and “Divide” ft. Kelsey Bulkin. This strategy worked well with the first and third listed, both sounding a bit Purity Ring-esque with  “Everything at Your Feet” sounding similar to 2012 Purity Ring, and “Divide,” a more sultry R&B adaptation. However, “Just a Memory” detracted from the cohesiveness of the album, and “Falls” ft. Sasha Sloan which is featured later on their album sounds very commercial radio appropriate, with just enough spice in their use of vocals to sound different.

There are songs weaved throughout that showcase Odesza’s maturation and growth very well, but don’t radically deviate from their sound, those cuts being “Meridian,” “La Ciudad,” “Show Me,” and the final song, “Corners of the Earth” ties the album together using the layering of RY X’s voice in a chilling and stirring way, a mix of traditional slow symphonic patterns to conveying emotion with momentary sounds of a synthesizer. The absence of quick rhythms or complicated layer does not leave the album lacking, but serves as a reminder as to how electronic can be truly beautiful without being excessive.

It’s hard not to live within the fantasy dreamland that Odesza has created over the past 5 years, and not feel disappointed as the sound suddenly shifts from the expected. Especially with Odesza’s sound being one that was the colorfully dreamy outlet and seemingly uniting force between different preferences in the electronic scene, but as Foreign Family collective has grown and more artists have gained popularity sounding akin. It was time Odesza shifted their sound and re-established their place as the duo that manages to do exactly that. This album has a few more songs that fell short than other ones, but it is a maturation, it pays a homage to what they know, and their versatility. Odesza will still certainly maintain their spot as the artist with the most features in lifestyle/travel Youtube videos.