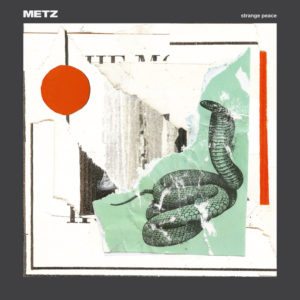 METZ’ third album Strange Peace delivers the chaos and distortion that their fans
know and love, but this time they weave a few new ideas and sounds to give
listeners something different from their previous releases. Not only that, but
recording engineer Steve Albini is also at the helm of this album, who has worked
with artists such as Nirvana, Pixies, Robert Plant and Jimmy Page.

The opening track, “Mess of Wires” starts right off with a whirling guitar and bass
riff from guitarist/singer Alex Edkins and bassist Chris Slorach. Hayden Menzies
attacks the drums with his signature aggression and technicality that you rarely find
in a punk rock group these days – or any rock group for that matter. The track has
the same sleek tension, angst and anger that were very prominent on their last
album from 2015. It appears they begin this album with a nod towards their last
album before diving into more experimental territory for them.

The next two tracks, “Drained Lake” and “Cellophane” play more out like garage
rock hits. “Cellophane” even has the catchy, sing-along chorus to match with the
garage rock sound, which is definitely something new from the band. Even with the
changes in sound from an all out punk thrash to a more laid back “in-the- pocket”
garage rock anthem, METZ still keeps the volume and distortion cranked like they
always do, ensuring that this adventure from their norm isn’t too far a departure for
longtime fans.

Although this album isn’t explicitly political and METZ have never set out to be a
political band, the album and the sounds they have been making since they first
started in the early 2010’s really fit with the overall climate in the world today in
2017 – with tensions building up all over the world from events like Trump’s
election, Charlottesville and the Manchester bombing to name a few. Strange Peace
is definitely in the running for “soundtrack of the year” when you take all of that into
account and how fitting the sounds and emotions METZ create with this album.

Overall, this album provides new and old fans of METZ with their signature sounds
and also newer ideas and sounds for the band, but this reviewer cannot help shake
the feeling that something is missing from this album to make it truly extraordinary.
METZ explores newer sounds that are new to them, but not really new to the genre
or popular music and each of the songs are well written and performed, but none of
them particularly standout and extraordinary.

Granted, many punk rock bands (even the great ones) spend their whole careers
trying to develop new sounds and never quite find it, or just stick with the style they
know and never change it, so I applaud METZ for being able to actually break the
punk rock stereotype of “all of their songs sound the same.” Hopefully, METZ will
soon follow up this solid album with some work that really dives deeper into these
new ideas they’ve presented to the listeners on Strange Peace.