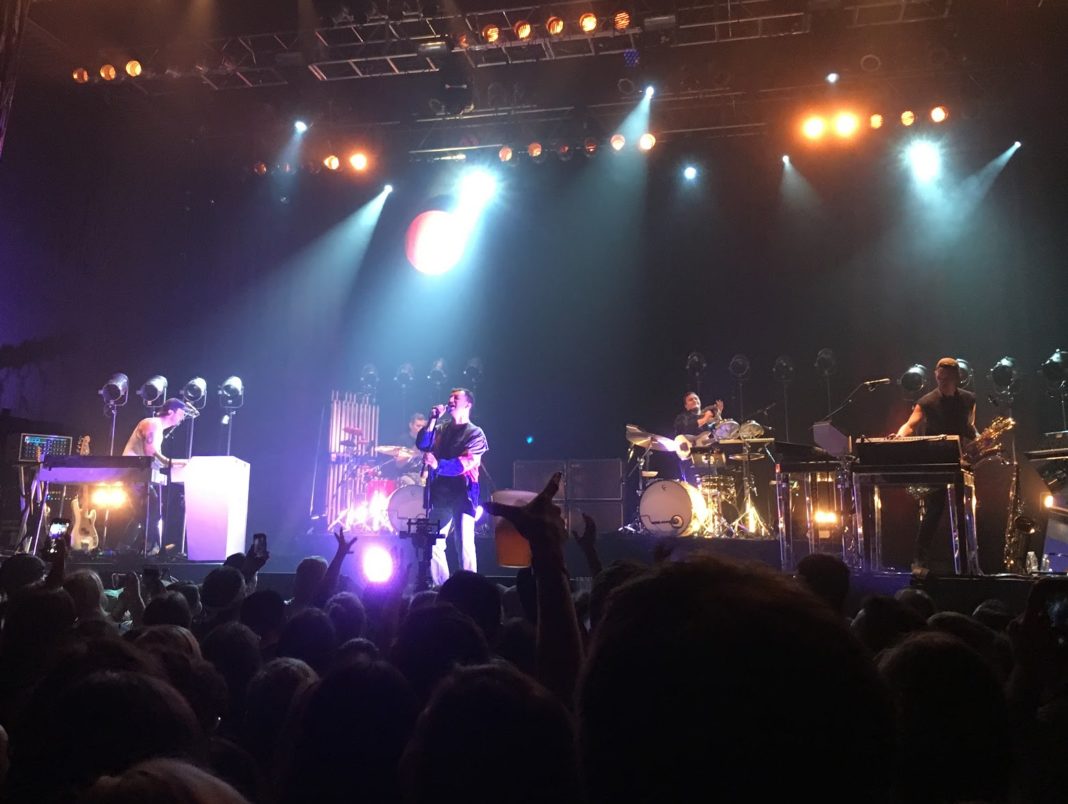 I walked in as the opener, Tangerine, was just beginning, and I have to say that they were one of the best openers I’ve seen in awhile. They were reminiscent of 90’s indie rock, but also had a very modern feeling, and played songs with solid melodies and catchy choruses, so I predict they will be going places.

Bleachers came on after about thirty minutes, and started in a unique way. They had a big glowing blood moon looking sphere above and just the lead singer, wearing a white navy uniform, illuminated by the lights. The overall effect was surreal and like a fairytale, which set the mood for a fun, extraordinary night. For a pretty normal indie rock band, they had a lot of different instruments at their use. They played on many guitars, keyboards, drums, chimes, bells, and saxophones. Jack Antonoff, the lead singer even took the time to spout the majesty of their Juno 106 keyboard and claimed it as the heart of Bleachers.

The set was pretty good; it hit all the hits and brought the energy up, down, and back up again. One highlight was a pause during “I Miss Those Days” to sing happy birthday to one of the drummers, and then Antonoff passed a cake around the audience. After a loud, wild rendition of “Rollercoaster” they brought it back down for a soft, stripped version of “Carry On,” which is technically a Fun song, whom Antonoff is also lead guitarist for.

The energy went back up for their two last and most popular songs, “I Wanna Get Better” and “Don’t Take the Money.” Antonoff got so pumped that at one point while chucking an open water bottle into the crowd, he very nearly hit the sound board with it, and consequently threw the next one with less gusto. Despite the near catastrophe, Bleachers put on a passionate, magical show that will only keep them moving up in the music industry.