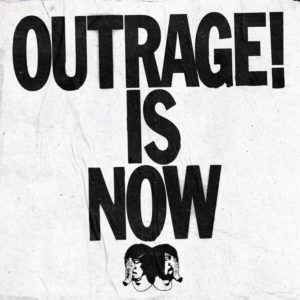 A decade after Death From Above 1979’s seminal debut album “You’re A Woman, I’m A Machine”, a thrilling dance-punk album that truly emphasized the “punk” part of the genre’s name, the band followed up with “The Physical World”. The album, while solid, felt like it didn’t properly utilize the talents of their band members, with Jesse F. Keeler’s basslines a lot slower and less energetic, and drummer/vocalist Sebastien Granger’s vocals a lot more muted than his previously wailing shouts from their debut.

It seemed like their sound would continue in a more dance-oriented direction after this album dropped, an impression not helped by the keyboard-heavy “Freeze Me” single dropped over the summer. However, as it turns out, “Freeze Me” is somewhat of an outlier on this new album. “Outrage! Is Now” is mostly a return-to-form of the energetic, grittier sound of “You’re A Woman, I’m A Machine”, quenching any fears that their sound would only continue to grow more watered-down.

“Nomad” starts the album off with a heavy pulsing drumbeat and a catchy but forceful bass riff. It’s a hell of an opener, and its tempo reminds me somewhat of a marching band. “Moonlight”, my favorite track on the album, has a fast-strumming bass rift that sounds like a swarm of bees (I mean this as a compliment), and the drumbeat is varied enough to make it feel like a chase of sorts. “Statues”, with its sludgy sound and slow but forceful beat, reminded me a bit of early Black Sabbath. And “All I C Is U & Me” and “NVR 4EVR”, with their more standard punk beat, enjoyably noisy riffs, and Sebastien Granger’s nasally, almost screaming vocals, sounded quite close to their original style, to the point where they felt like they could’ve been outtakes or B-sides of the material recorded during the sessions of their debut.

However, not all of the tracks provide an enjoyable listen. The aforementioned “Freeze Me” is easily the worst song on the album, the overly-distorted bass rift being as enjoyable to listen to as nails on a chalkboard and the tempo being too slow to provide any energy that could’ve made the song more tolerable. The title track “Outrage! Is Now”, while better, is kind of a slog of a song, with too slow of a tempo to provide the sense of excitement that’d be implied by it’s title. I wondered if the band members were about to fall asleep while recording the verses. If it weren’t for the chorus, consisting of the phrase “Outrage Is Now” repeated a few times, it would’ve easily been the least memorable track on the album.

The highs of “Outrage! Is Now” never surpass those of “You’re A Woman, I’m A Machine”, but it definitely provides a more consistently rewarding listen than “The Physical World”. Fans of their debut, as well as fans of punk-rock looking for a more interesting take of the genre that doesn’t sound too unrecognizable as punk, should give this album a listen.