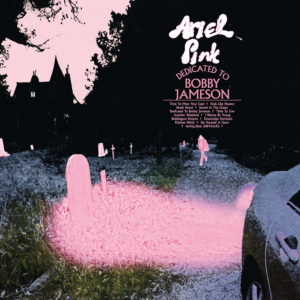 Three years after his last album release, Ariel Pink is returning with his 11th studio album, Dedicated To Bobby Jameson. It’s named after the tragic blues and folk star Bobby Jameson, whom in his final years experienced massive substance abuse, criminality, and disillusionment with the music industry, before dying in obscurity in his mother’s house a couple of years ago. His tributary title is no mere coincidence, as the album highlights Ariel’s own evolution and musical disillusionment creating what can be arguably defined as insular, intimate, and amatory.

A thundering intro is delivered with “Time To Meet Your God,” a dead ringer for his Pom Pom days with its apocalyptic lyricism and crashy instrumentals. Ariel states that the album’s story “follow[s] the protagonist through a battery of tests and milestones, the first of which sees him reborn into life out of death.” This song chronicles the first of those milestones: the process of detachment from the world and attachment to the idea of eternal isolation, which then slowly reverses itself and the protagonist starts to make a return to reality, eventually aiming to be fully among the realm of functional humanity. The rest of the album chronicles his seesaw between innocence and trauma as part of that path, having to abandon isolation and fully come to terms with the demons that drove him to desire detachment from pain.

He makes a brilliant transition out from the insular mood of the first part of the album with “I Wanna Be Young,” where he explores his first stages of re-birth as the disillusioned and lost person that left. He specifically sings about his past romance as the main obstacle that prevents him from being having his mind grounded in reality, almost a complete circle from Pom Pom’s “Sexual Athletics”, where he delved heavily into his battle between his need for intimacy and his sexual desires. He is fearless in re-expressing those desires and his disdain for the certain level of maturity expected of a grounded, functioning adult in the real world (with typical levels of Ariel Pink vulgarity, no doubt).

“Kitchen Witch” is what I feel to be the standout single, with Ariel’s and Charlotte Ercoli’s vocals handing off seamlessly with elements of 80’s goth bands sprinkled throughout. I also appreciate how accurately this song portrays romantic trauma and how it can potentially last for years after the person leaves, as it serves as a critical piece of regrounding (being mentally ‘here’) one’s self back into the real world. It’s very much the perfect song to highlight the thoughts of someone being freshly revived and re-exploring emotional intimacy with their own world.

The last part of the album gets a little hazy during the last couple of tracks. “Acting” in particular was confusing for me to understand at first. However, this is also his song that tells a story of the “rebirth” portion and therein lies its redeeming charm, being freshly plopped back into life that you don’t really know what you’re going to do next, “acting” your way through everything, so to speak. And with that, I can’t wait to see how his lyrical style and glam-pop madness evolves after this long and strenuous spiritual processing. It isn’t for everyone, but, it’s Ariel Pink—were you really expecting something ordinary here?