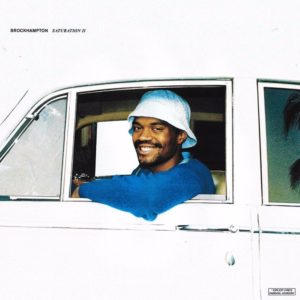 On June 3rd, six days before the release of BROCKHAMPTON’s debut album, SATURATION, was released, Kevin Abstract tweeted, “we will also release our 2nd album this summer.” A month and a half after their debut, BROCKHAMPTON delivered on their promise, and released SATURATION II.

Being a sequel to their first album, Saturation II is similar, but makes some noticeable improvements. The production has been stepped up, with more interesting beats, and a much crisper sound. There are a lot of South Asian influences, with many unorthodox instruments such as a Sitar being used often. This differentiates the project from the first one, although there are still a lot of similarities in the sound.

Kevin Abstract does a lot of experimentation with the pitch of his voice, with many of his choruses being pitched up, for instance “GUMMY,” the intro track, making him sound more like a female vocalist, specifically, M.I.A. “This gives the album more variety, not that it needed any in the first place. With a total of seven different members of the collective lending their vocal talents to the release, each with a unique voice, diversity is a core aspect of the BROCKHAMPTON group.

On top of that, many of them have different vocal styles or pitches that they employ throughout, creating a lot of contrast. Merlyn Wood is the first one who comes to mind, especially on cuts such as “SWEET.” He starts his verse yelling in a shrill voice, “Don’t call me stupid, that ain’t the way my name pronounced,” before switching to his normal voice. JOBA does something similar during his verse later, adjusting his pitch to represent different people. The many voices of each individual member of BROCKHAMPTON adds a new dimension to the project, and is a part of what makes them so fascinating.

The theme of this project is where the group seems to have stagnated. Many of the same motif’s present in SATURATION are present here, and although individually they are executed well, an overarching narrative is lacking from SATURATION II.

The focus is still on being an outsider, whether that be because of your race, your sexuality, or just a feeling of not belonging. Ameer Vann bluntly expresses this on “FIGHT,” “And like my teachers would say/’Little black boys have a place in the world’/Like hanging from trees.” His delivery is chillingly nonchalant, and the bare instrumentals put all the focus on his words.

“JUNKY” tackles a variety of issues, such as acceptance, homophobia, sexism, and trust issues. Kevin and speaks about not being accepted by his mother until he had money “I told my mom I was gay, why the fuck she ain’t listen?/I signed a pub deal and her opinion fuckin’ dissappearin’.” Merlyn expresses forgiveness towards his family “For guilt-tripping feelings whenever they call my number,” while Matt Champion tries to justify his mother’s issues, “My mom’s no alcoholic, she just wanna drown her sorrows.” Lyrically this is one of the heaviest tracks on the project, although most of the other cuts don’t fall too far behind.

BROCKHAMPTON also commonly references their origins, like in “JELLO,” “Met all my friends through Kanye West/And I ain’t met him yet,” a clever reference to the fact that the collective met on Kanye To The (KTT), a Kanye West fan forum. Many of the BROCKHAMPTON members are from Texas, so there are a few references to Beyonce, and more importantly, Whataburger, “When I’m in the Whataburger/All the kids know who I am/I need a honeybutter,” on “SWEET.”

Similar to their debut, the closing track features only bearface, and is a slow, dreamy song. Titled “SUMMER,” it evokes the feeling of summer coming to a close, with a simple, pensive piano line, and an electric guitar coming in towards the end. One of the highlights of the record, it provides the listener time to digest the rest of the project, and a break from the chaotic intensity of the group. It is also the only song with six letters, instead of five like the rest of the songs, continuing the song naming convention seen in SATURATION.

After listening to this record, I’m looking forward to more individual projects from each member. SATURATION II does a really good job of showing off everyone’s talents, and I yearn to hear more from each of them on their own. As a collective, they’re one of the most interesting groups in the scene right now, and continue to push the genre forward with some experimentation that continues to pay off. This is simply because of everybody’s separate talents, and the effortless chemistry they share. The fact that this record came out so soon after their first and there is a noticeable growth in their skills is impressive.

Continuing their tradition of announcing their next album early, the first single for SATURATION III came out three days before SATURATION I, and it shows a lot of promise. BROCKHAMPTON has already managed to drop two incredible albums this year, mere months apart, and they are about to make that three. The speed at which they create quality music is extraordinary, and it’s thrilling to think about where they will go in the future, both as a collective and as individuals.