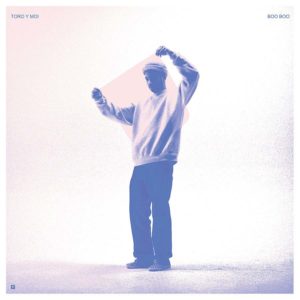 Here’s a truth: “Girl Like You” is the 80s-inspired R&B jam of the summer and “You and I” is the ambient pop-ballad we’ve been waiting for. You cannot deny this. So, in light of of the 2017, proper Toro y Moi record, Boo Boo, we refuse to accept anything less than exceptional. Boo Boo delivers.

Chaz Bundick, recently changed to Chaz Bear, made Boo Boo for a variety of reasons – a breakup, existential incidences, introspection, self-revelation, a love for 80s music – and each reason seems apparent and relevant, expressed with a subtle touch. The Toro y Moi artist has never been confound to a single style of music, but Boo Boo in particular is a departure from anything previously released, despite claims to his “roots”. Chaz Bear has crafted Boo Boo with a lot of effort and consistency, capturing the essence of a feeling from just one synth tone and extrapolating from there.

It was stated early on that Boo Boo was a take on “pop”. Structurally, this holds true such as on “Window” – which, in auto-tune, sings like artists Travis Scott or Young Thug, or even Daft Punk – the untroubled “Mona Lisa”, or the Prince-meets-MNDSGN “Mirage.” Introductions morph into an ambiguously shaped verse-chorus-bridge and wade to outros, fluctuating between rhythmic beats and hooks to brooding and dreamy synths. After several listens the ebb and flow of the album is realized and well thought.

The ambiance created for much of Boo Boo however is a slow, washed transparency. The full body shot of Chaz Bear on the cover in a purpleish-blue hue, holding said transparency in front of his face, depicts the feeling and symbolic gesture of an artist to be looked at and tried to be seen. It’s a personal look through a filtered lens.

It’s only a state, of course, as proven by the ever-changing genre choice with each Toro album release. Even the most reaching song “W.I.W.W.T.W.” changes the course of the entire album in an instance. The transition of Chaz singing, “What’s wrong with this world? It’s got me thinking too much” and sums up the struggles of his human relation mentioned on the album, to Madeline Kenney taking over in Chromatics fashion with lines like “when I call, don’t pick up”, leaves the listener as well as the album in the ether, a little hopeful.

Song writing is evident but not nearly as explored as on previous releases What For? or even Anything In Return. Lesser a compensation for aesthetic and more a stylistic focus, closely related to the Toro y Moi mixtape Samantha of 2015, minus the hip hop influence barring “Girl Like You.” It’s an aesthetic that Chaz Bear has capitalized on throughout Boo Boo. The coastal-bedtime synth tones of “Labrynth”, eerily similar to Mario 64’s “Dire Dire Docks” but better, builds to the simple rhythm and slow-pop cadence from Bear. “This apocalypse is never ending… start a second life and keep moving,” he sings over low tone guitar plucks. If there was ever a thing about attentive fading it’s how Chaz leaves you with many of the tracks.

And ultimately the genius of Boo Boo points in the direction of “You and I”. The forward thinking, slow and deliberately atmospheric song puts Chaz Bear’s vocals in the front. On top of the fact that his vocals are scaled back overall on Boo Boo, this could be his latest masterpiece of a song, gently pushing the song into mild peaks where the chorus and rhythm are paired with “I think you and I just weren’t thinking right.” In previous thoughts he questioned his actions, and now he answers them; his posture is seemingly stoic and his attitude is accepting. The song doesn’t touch down, but rather lifts off into a fade. The music video pictures the artist looking up into a windowed bright light.

From top to bottom Boo Boo is a vision. An inspired album that seems simplistic and sometimes straightforward still contains complex sounds, moods and music ideas. Wrap that into the context of Toro y Moi and it only seems greater. The creative output of Bear keeps on morphing, and even if you think there isn’t a right place for him to go he usually manages to stick his execution. Some say this is a beckoning to the artists past, but in a way it’s all very future.