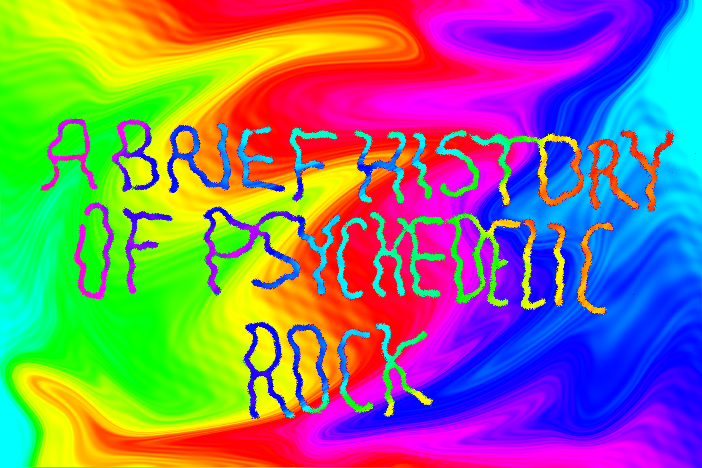 What do you think of when I say psychedelic rock? Most likely images of the counterculture of the 1960’s, Woodstock, and big names such as Jimi Hendrix or The Doors are your first thought. In fact, many of the bands we consider to be pillars of classic rock are considered psychedelic rock bands. Even the earliest psych albums are influential to this day, each post 1960’s decade heralding a revival of the genre. Important features are heavy reverb, a large key presence (especially electronic organs), Eastern instruments and musical themes, long instrumental sections, and surreal lyrics that often reference the use of hallucinogenic drugs.

With the accessibility of modern music and the surge in popularity of the alternative rock scene, artists such as Tame Impala and Mac DeMarco enjoy great popularity and ensure the genre stays alive and well. Perhaps a surge in psychedelic style is not only due to the recent push to reduce jail time and stigma surrounding drugs (particularly marijuana), but also for a decidedly political and jaded youth.

For me, the genre and subsequent sub-genres and revivals remind me of the reason I started becoming an avid music listener in the first place; growing up on albums like Disraeli Gears and The Dark Side of the Moon were integral in the development of my personal music taste and exploring my own definition of music. Maybe this is why we love psychedelia- it reminds us of our parents, our grandparents, or our very first album. Perhaps it reminds you of the first song you heard on the radio, or a distant buzz over the speaker while shopping. Thus, it is even more important that we learn how psychedelia came to be…

The year is 1965. A clear youth counterculture has begun to emerge, experimenting in their usage of drugs such as weed, psilocybin, and LSD. A little over a decade has passed since the term “rock and roll” has been coined; this is when the 13th Floor Elevators emerge on the Austin music scene, inspired by folk and blues. A year later, The Psychedelic Sounds of the 13th Floor Elevators is released, its liner notes and album art explicitly advocating the use of LSD as a means of freeing the soul and expanding the mind. 13th Floor members Roky Erickson, referred to as the “godfather of psychedelic rock,” and Tommy Hall are credited with coining the term “psychedelic rock”. Hall’s use of the electric jug in particular is a key element of reproducing the feel of an acid trip in music, emulating a bending of reality and a trance-like state. The lyrics also incite a distant, out-of-body feeling, from lyrics about “liquid distant castles” to “living on monkey island”.

Although moderate in success, the album is arguably one of the most influential in establishing the genre and helped Austin grow as a hub of music in the South. Other notable artists to emerge out of the Texas psychedelic rock scene include Janis Joplin, Red Krayola and Bubble Puppy. At the same time, author Ken Kesey and a group called The Merry Pranksters were touring the San Francisco Bay Area handing out acid (not yet outlawed), accompanied by early performances by The Grateful Dead, and visuals created by oil projections in what would later be known as “The Acid Tests”. As LSD became more influential in youth culture, it became more and more clear across the nation that it would shape the next wave of music.

The following year, The Beach Boys release Pet Sounds, not only hailed as one of the greatest and most influential albums of all time, but the defining album in bridging psychedelic rock and pop music, thus introducing the genre to the mainstream. The album reached #10 on the Billboard charts; following this, The Beach Boys began to produce a series of psychedelic albums (Wild Honey, Sunflower, etc.) that, although not as successful commercially as their prior albums, showed a clear shift in both their sound as well as mainstream music’s.

Another pioneering album in psychedelic rock history, Sgt. Pepper’s Lonely Hearts Club (released in 1967, celebrating a recent 50th anniversary), includes nods to Pet Sounds, which was one of the main inspirations behind the album and The Beatles’ shift in sound. This is evident by the use of animal sounds in “Good Morning Good Morning” (similar to the coda of “Caroline, No” off of the latter). Sgt. Pepper was an immediate commercial success, and is also renowned as an artistic and musical masterpiece. In response, a British psychedelic rock scene began to grow, more experimental and pop-like in its sound than the heavy American counterpart which paved the way for the birth of metal and prog. These two albums are arguably the most integral and influential in the development of psychedelic rock, and continue to be praised as masterpieces of rock and roll.

In 1969, psychedelic rock reached the peak of its popularity. This is the year we get the Woodstock Festival, one of the most definitive moments in rock and roll. This is the height of youth counterculture, and within the same year it comes crashing down with many “acid causalities”, nervous/psychological breakdowns caused by a mixture of fame and heavy hallucinogen abuse. Some of the most notable acid casualties include Brian Wilson and Syd Barrett, with several “27 Club” members dying the following year from a variety of reasons. With the death of many of the “greats” of psychedelic rock comes the death of its popularity in the mainstream, its sub-genres readily taking its place.

Although a few psychedelia bands remained, throughout the 80’s it mostly served to influence new genres such as shoegaze. It retreated into the alternative scene, and in the 1990’s bands such as The Flaming Lips and Super Furry Animals sought to revive the genre to its former glory. Although they achieve some popular success, this “neo-psychedelia” is still decidedly underground. It is not until around 2001, with the so-called “revival” of rock and roll and a flourishing and increasingly popular alternative scene that many neo-psychedelia bands form and thrive, such as Animal Collective, and Pond. This new wave of psychedelic rock maintains some of the key features of psychedelia, but more frequently blends with electronica and pop. In the mid-2000’s there are several breakthroughs into the mainstream with hits such as “Electric Feel” by MGMT and “Do You Realize??” by the Flaming Lips. As the indie scene began to take on a particularly large role with youth in 2010-onward, so did psychedelia and its influences. Today, we see the development of subgenres like acid house and trance music developing from the once again rising psychedelic rock scene. Whether a lifelong fan or a listener trying to branch out, perhaps it’s time to spin that dusty acid rock vinyl at the bottom of the bin just one more time.