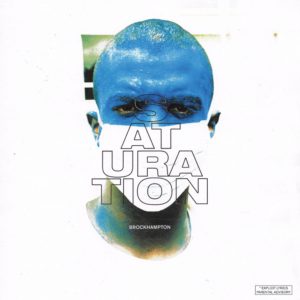 Originally having met online on the infamous Kanye West fan forum, KTT (Kanye To The), BROCKHAMPTON is a boyband made up of 15 members. It was created by Kevin Abstract, who started it “because [he] didn’t have any friends.” Eventually they all moved in together into a house in San Antonio, closing the distance between them. They have since moved to South Central LA, where they all live together in a house, where they make all their music. Along with the release of their sophomore album, SATURATION, the group also premiered a TV show on VICE titled “AMERICAN BOYBAND,” which follows them on Kevin Abstract’s tour.

The members consist of a variety of rappers, singers, producers, and other people who work behind the scenes. Although most of their music is hip-hop inspired, they do much more than just traditional hip-hop, which is why they call themselves a boyband instead of a hip-hop group. It’s hard to keep track of who’s who without knowing who the members are, but this doesn’t take away any enjoyment from listening to this album, as everyone is highly talented.

SATURATION shows off their versatility and tells a story fabricated by their web developer, Robert Ontenient. The narrative is about finding your place, both in the world and your group of friends, as well as feeling comfortable in your own skin. This is made clear through the short but powerful skits scattered throughout the album. The music videos released for the singles also have short bits at the beginning featuring Robert, which give clues to the meaning of this project.

In the videos, Robert introduces himself and then follows up with a statement about himself. These statements are things often associated with hip-hop, such as hating the police, wanting to be famous, and having a gold chain. None of these come to mind when you think of a web developer. The final video is “LAMB,” where Robert says “Me llamo Roberto, y esta es my familia,” which translates to “My name is Robert, and this is my family.” The music video features the members of BROCKHAMPTON taking turns singing along to the song. This signifies Robert finding his place in the world, among his group of friends who he now calls his family.

From start to end, that is how this project progresses. The first half is about not knowing your place, and being violent or materialistic to try to compensate for this confusion. The very first line of “HEAT” depicts this, “I got pipe dreams of crack rocks and stripper poles.” Towards the end, it’s about having found your place, or being more honest with yourself about what you want. “MILK” which is towards the end of the project, contains lyrics such as “I gotta get better at being me” and “I just want a friend that I can hang out with (Being who I am),” which explore this realization.

Given the large size of the group, there are a lot of creative ideas present in this album, and it has a lot of diversity. This shows how versatile the group members can be, but at the same time it has a consistent sound. There aren’t any songs that sound like they don’t belong on this project, and they fit in to each other nicely thanks to cohesive production. The individual members adapt well to the different sounds on the album, such as Ameer Vann being very aggressive on “HEAT,” the violent opening track, but also melodic and introspective on “FACE.”

The message being delivered on this project is in line with Kevin Abstract’s and the rest of BROCKHAMPTON’s mission. They are a group of people who felt like outsiders who didn’t have many friends. But they have found each other, and consequently their place in the world. Robert tells this narrative because he is simply the group’s web developer, but he’s still a part of the family. Despite not being a musician, he was still accepted for who he was, and has become an important part of the band’s online presence.  This message is conveyed through small hints, but once you piece everything together it becomes clear.

It’s incredible to think that this was put together in just three and a half weeks, given the complexity of this project. BROCKHAMPTON has also begun to tease their next album, currently titled SATURATION II, due out later this summer. Before this release, they weren’t very well known, even among the hip-hop community. But they have generated a lot of commotion with this release, and it’ll be exciting to see what they create in the future.