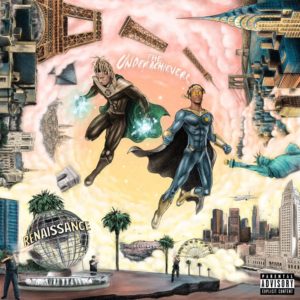 Renaissance is The Underachievers’ latest project. The duo is made up of Issa Gold and AK The Savior, and Renaissance is a follow up to their 2016 mixtape, It Happened in Flatbush. This release was originally slated for February, but got pushed back to build more hype for it. The Underachievers hail from Flatbush, Brooklyn, New York, which has influenced their sound greatly.

Regional influences in hip-hop are not as prevalent or clear as they used to be, there was a very clear difference between west coast and east coast hip-hop. These differences are still present today, but many artists have their own sound or influences outside of their region. Despite this, The Underachievers have an unapologetic east coast sound which immediately stands out.

There’s a fair number of producers on this album, although Issa Gold and AK executive produced this project. The production is cohesive and clean throughout the whole album. In line with the title, Renaissance, it has a lot of boom-bap beats, reminiscent of rap music from the ‘90’s, which is considered a renaissance for hip-hop.

Their flows on this project are very good, and both ride the beats well. They have a good variety, so no two verses sound alike. It always seems effortless as well, they are very confident on each beat, and have no issues rapping over any of them.

References to several things are made throughout the album. “Gotham Nights” starts with Issa referencing J. Cole’s song, “Cole World,” with the lines “In this Cold World/Ain’t no pun intended to J. Cole.” They express confidence through references as well, such as on “Crescendo,” one of the most energetic tracks on the album, in which Issa raps, “I’m what happens if 2Pac and Jay Elec ever collided.” Other allusions are made throughout the project to things such as movies, and “Cobra Clutch” refers to a wrestling move of the same name.

Renaissance doesn’t have a very strong central theme. Most of the tracks are expressing confidence in their abilities, or their love for their favorite plant with lines such as “Never cuff a chick but me and Jane we at the altar,” on “Super Potent.” This is the only major downside of this release, although The Underachievers have stated that they themselves consider this album a mixtape. They claim it consists mostly of B-sides for their next effort due out in September, which will have a stronger theme and more powerful message.

Although there is no strong central theme to Renaissance, the technical abilities displayed by Issa Gold and AK in both their flows and production are impressive. Admittedly, this is the first I have heard of The Underachievers, but after listening to this release I’m excited to go through their discography, and look forward to their future efforts.