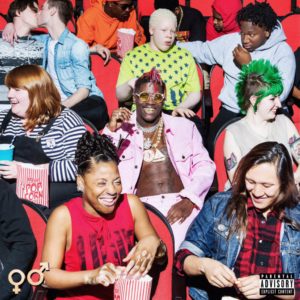 Lil Yachty is one of the most divisive rappers in the industry right now. His debut mixtape Lil Boat was initially met with contempt, but had a devoted group of followers. Eventually, more and more people started to come around to liking it, whether it was genuine enjoyment or just them following the crowd, Lil Yachty started to get popular.

He has a way of angering old-heads, hip-hop fans who do not enjoy current rap artists, and much prefer older artists such as Nas and 2Pac. Yachty claimed that he didn’t know any 2Pac or Biggie songs, which was basically unacceptable for many of his haters. This made him one of the most controversial new age rappers.

Despite this, he has a very dedicated following, and he dubs himself “the king of the teens.” Teenage Emotions is his debut album, and is a response to both his haters and his fans. The theme of this project is meant to appeal to his fans, while the production and some of his rapping is meant to turn haters into fans. Unfortunately, this has resulted in Yachty pleasing neither group entirely.

Lil Boat became beloved because of its strange new style. Yachty dubbed it as “bubblegum trap,” and that name perfectly described it. Filled with bubbly beats with heavily auto-tuned singing and rapping, it was charismatic, and Yachty seemed to be doing it purely for fun. Part of the reason why Lil Boat’s style worked so well was Yachty’s close friend and main producer, TheGoodPerry. Teenage Emotions only contains one song produced by TheGoodPerry, and instead has beats that are much more trap-influenced, rather than Perry’s bubblegum trap production.

This could be Yachty’s way of trying to appeal to a wider audience, but by doing so he’s lost his unique signature style. His technical abilities aren’t very strong on their own, especially his singing. But they worked well with the production, and helped carry him through. Without these beats, Yachty’s weaknesses stand out.

Lyrics were never Yachty’s strong point, but he’s stooped even lower on this project. There are some incredibly questionable lines, such as “’Cause she get wet and she suck me like a insect/She my step sister, so I guess that’s incest,” on “Priorities,” which left me at a loss for words to say the least.

Lil Boat had 14 tracks, clocking in at a total run time of 45 minutes. Teenage Emotions contains a whopping 21 songs, and a run time of 1 hour, 9 minutes, which is exhausting to get through. Many of the songs start to sound similar, and some are simply too long and repetitive. Yachty would have benefited from cutting it down to fewer, more focused tracks. However, this could be a result of the rise of music streaming services. Longer projects benefit more than shorter projects, as each song stream contributes to chart progression.

Even with all these short-comings, there are some good moments on this record. “All Around Me” is a heavily R&B influenced track about Yachty making sure to support his friends after his success. The YG feature shouldn’t work well in theory given their vastly different styles, but YG rides the beat well, and Yachty’s auto-tuned voice compliments YG’s aggressive rapping well.

“X-Men” is energetic and in your face, perfect for Evander Griiim, who is featured on the track. Although Yachty does well enough on track, and it’s one of the highlights of the project, the Evander Griiim feature was underutilized. Griiim’s chorus was good, but I would have loved to hear a full verse from him on that beat, and it left me wanting more from him.

For his debut album, Yachty tried to please as many people as possible. Including both his fans and his haters, but that led to an overly long, unfocused project. Although the theme is meant to be about his adolescence as the title implies, it isn’t strong or even that evident in the tracks. The production was good, but it wasn’t good for Yachty’s style. Given how unique Lil Boat was, it’s disappointing to see Yachty deviate from that and go for a more generic trap sound.