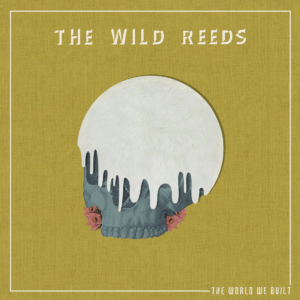 With the three beautiful voices The Wild Reeds has in its membership, the band almost doesn’t need to be good at writing and composing music. But maybe the fact that the three founding voices areso good at writing and composing is what makes their sophomore album, The World We Built, so powerful. For this album, they remained faithful to their harmonies and their folky sound but brought in more electric guitars and sound effects to create a layered, cohesive work that progresses in a good direction.

I first met The Wild Reeds when they opened for Langhorne Slim on a Monday night in 2015 at the Loft here in Dallas. They opened with an acapella rendition of the title track of the album. Their three-part harmonies filled the room and silenced the crowd. Since then, I’ve watched the group grow to fame with their Tiny Desk Concert and 2016 EP Best Wishes. With this growth, the band had a lot of expectations riding on this album. From the opening electric guitar and drums, it’s clear that they’ve lived up to them.

They set their nostalgic and at times anxious tone with the first line, “Do you remember ’95 / and how good it felt to be alive / when the world, when the world was small / I didn’t fear, I didn’t fear it at all.” Throughout the album, the band revisits their memories with lovers and friends while evaluating their lives at this moment in time. “Everything Looks Better (In Hindsight)” is almost a letter to a lost lover in which the band takes lessons from the past to advise them today, singing, “And I tell you friends it was easier then to give your heart away” and “So if you’re telling a story, especially of heartache / it better ring out true.” Meanwhile, “Capable” is a pep talk in the bathroom mirror before a big break with the chorus “I’m capable of so much more / than you people give me credit for / and I just need to show it.” Overall, The Wild Reeds use their lyrics to take a broad and honest look at their lives and build up courage for the future.

The instrumentation blends their folk roots with modern electric instruments that fill out the songs. The sound effects on songs like “Fall to Sleep” and “Capable” are not a novel idea – just last year, Bon Iver and The Avett Brothers branched out and integrated electronic music into their discography – but The Wild Reeds don’t aim to let electronics take over their songs, just to let it enhance the songs very effectively. The drone noises paired with a sparse drum beat on the opening of “Capable” create the oppressive atmosphere that the lyrics try to break out of while the sustain and echo effects on “Fall to Sleep” paint a picture of driving slow with the windows down on a calm night. On other songs, the layering of guitars and drums and voices creates an atmosphere of confidence and empowerment that goes a long way to supporting their lyrics throughout The World We Built.