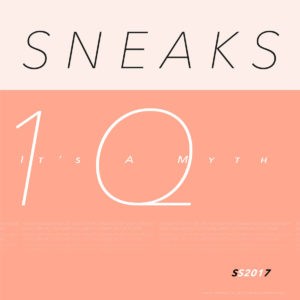 Eva Moolchan, performing as Sneaks, has a unique ability to switch between sweet youthfulness to a daunting edge. Her post-punk, spoken-word mix intertwines dark basslines with childhood memories. Her lyrics are just as much abstract as they are about the objects she sees in her room. While avoiding many of the cliches of youthful punk, she still muses about young love and nostalgia in ways that are often just bizarre on music, particularly her sophomore release, It’s a Myth.

Gymnastics, her last album, ends on a dissonant, synth based track that feels ever so slightly out of place – exactly where It’s a Myth picks up. With its lack of signature bass riffs, some listeners will miss the point of the opener “Inside Edition.” Sneaks is establishing a new style she only began to explore in her previous release. By harmonizing her deadpan vocals she creates a sense of multiple singers, the youthful party and a more mature, jaded singer both iterating the same quip.

Signalling an instrumental shift, Moolchan awakens her bass on “Hair Slick Back.” The heavy bassline has an engrossing edge repeating over and over. “Hair Slick Back” is possibly the most familiar song on the album, echoing her previous album with the clear focus of the instrumentation on Moolchan’s bass. After a short riff mostly filled with singing and topped with spoken word, the following song “Devo” is over as soon as it started.

Near the middle of the album “PBNJ” realizes the paradoxical nature of Sneaks. Over a melodic bassline she sings to “PBNJ” in serious tone, ironic to the absurdity of the subject. In the case of more figurative language, referring to someone you love or idolize with a pet name is anything but punk. Her paradoxical character is consistent with her bass riffs which beg to loop on to infinity but stop after a minute or so. By throwing so many basslines into a tight space the gripping hypnosis of the tracks carries you right into the next. Using only three distinct instruments, drums, bass and vocals she manages to fill each track to the brim.

Without abandoning the style of Gymnastics, Sneaks develops new sounds in the span of 18 minutes of new material. Perhaps just as the final track on Gymnastics told us where It’s A Myth would pick up, the final track on It’s A Myth aptly titled “Future” will carry the torch. If her airy vocals and laid back instrumentation indicate anything it’s that Moolchan will continue to develop her addictive basslines and charismatic edge.