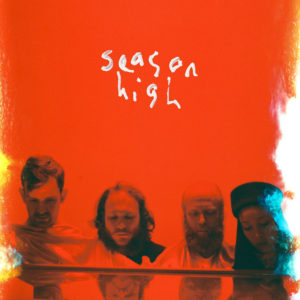 Season High is a ticket to the trendiest underground electronic dance floor. It has everything e-heads feel at home with. There are experimental garbage can echoes, continuous muted clicking, subtle stepping synth saws, and many more. As expected, electronic music varies as much as their fans do. Nevertheless, there’s something on the platter for everyone to enjoy from Little Dragon.

At first glance, the track list seems very fitting to the album title. Season High’s songs meld together with the familiar theme of spring. From the start of the season, it’s as if the track list goes through the stages of new love. The first half of the album is about happiness, sweetness, and the exciting feelings of crushing. Towards the latter of half of the album, the song names take a darker turn; sunshine beginnings are replaced with trying to fight the inevitable end. Maybe Little Dragon is telling a story of how new love can sour out, not having control over nature’s seasonal cycles.

Season High has a constant theme of 80s beats and soft electronic blips. The percussions are in line with the musical trend of retro rhythms. Adding more to the decadal vibe, there are many instrumental solos that are reminiscent of your mother’s teenage record collection. Whether it’s crunchy guitar rips, synth keyboard arpeggios, or both together at once, the new songs on this record paint an early techno picture, filled with neon lights and smoky dance floors. Because of this, the album isn’t necessarily revolutional; however, it certainly offers an eccentric bond between past and present.

If a random song played in a random place, it can surely be distinguished by the unique vocals. These are one of the signature features of Little Dragon. Vocalist Yukimi Nagano manages to evoke a range of emotions while maintaining her slightly raspy tone. The scratch in her voice is very fitting and can mold to the different tracks. In “Don’t Cry,” she sings high pitched and softly with a faint whine, indicating blue desperation. Nagano’s style matches the 80s vibe of the album, especially in “Strobe Light,” where if the listener closes their eyes, the vocals resonate similarly to the one and only Michael Jackson.

To an outsider’s ears, the album can sound like a uniform sound. On the other hand, when songs are listened to with even a minute amount of detail, each are very different. Though they use similar instruments, the melodies are unique to each track. Such as in “Celebrate,” there is a pentatonic electronic lick, which illustrates the album’s influence of Asian music. Throughout the track list, there are a good mix of upbeat and calm and sometimes both, as exemplified in the funky “High.” There is a good selection for listeners to pick and choose what they like depending on how they are feeling, making this album a somewhat all-purpose record.

Even if there is a good selection, there are some tracks that are not delectable. Do not get fooled by the enticing titles because the song can sound completely unexpected. The title “Butterflies” would be predicted as some optimistic soft or sweet melody. On the contrary, this six-minute track acts as a kind of interlude. The entire song has a lethargic development, from silence accompanying the vocals to an unsettling buzzing background. Interludes are meant to act as a breather, but this track has too many breaths.

Little Dragon sticks true to their experimental sound, while still being able to direct a streamline focus if need be. This can be to their advantage or disadvantage, depending on what listeners enjoy. There is funky 80s tunes to dance to or quiet clicking buzzes to contemplate to. Though this album can sound streamline at a bird’s eye view, there are some very ear catching singles that can draw any fan in. Season High takes listeners through the journey of new love that can inevitably fizzle out, even if that takes only 43 minutes.