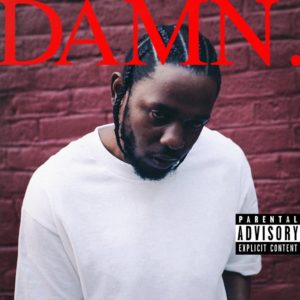 To Pimp a Butterfly is perhaps one of the most influential albums of this decade. “Alright” was adopted by the BLM movement as an anthem and aided in the albums overall powerful message. Two years later, DAMN. picks up where To Pimp a Butterfly left off and continues spreading the same message. This time, however, Kendrick interweaves some new themes, such as internal conflict and religion, but he still speaks for the populace.

Opening track “BLOOD.” Contains an excerpt from a FOX news report in which Geraldo Rivera quotes lyrics from Lamar’s song “Alright,” criticizing them. Different excerpts from this report are also used on the next two tracks, “DNA.” and “YAH.”, showing that Lamar took this criticism to heart and wants to refute. The lyrics that Rivera quotes speak up against police brutality, and later in this report he claims that hip-hop music does more damage to black youth than racism does. In these three songs, Lamar directly calls out the reporter, and aggressively expresses his feelings with lines such as “I’d rather die than to listen to you.”

The religious allegories and themes are apparent from the beginning of the album as well. The title “YAH.” refers to Yahweh, a Hebrew name for God, and on “DNA.” he also refers to Yeshua, a Hebrew spelling for Jesus’ name. Preceding the album, track “HUMBLE” made clear in its music video for the lot of religious imagery to be present, and its because of this that listeners can find common ground and relation.

Lamar expresses his own personal struggles with religion, as well as the effect he’s had in politics. On “YAH.” he states, “I’m not a politician, I’m not ‘bout a religion.” Especially after the release of To Pimp a Butterfly, Lamar was almost seen as a political figure, and a voice for the black community. He’s now struggling with his self-identity as he never intended on being viewed that way.

On top of being thematically very cohesive, the production on this project is also very cohesive despite featuring 13 different producers. There are a lot of interesting samples on this project, the most obvious being the FOX news clip used on the first three tracks. “LOYALTY.” features a highly-modified version of the intro to “24k Magic” by Bruno Mars. “PRIDE.” was produced by Steve Lacy, an 18-year-old who has been receiving a lot of attention lately who produces entirely on his iPhone.

There is however, a song that feels surprisingly out of place, and that’s “HUMBLE.” It is meant to contrast “PRIDE.” in a couple ways. First is the title, and secondly, the style, which for both songs is the opposite of the title. “HUMBLE.” is bombastic and aggressive, the opposite of humble, while “PRIDE.” is much more understated and relaxed, not prideful. The rock influences found in “HUMBLE.” aren’t present in any other song on the album, making it stick out.

Lamar is known for his ability to beautifully string words together and craft stories, and this is shown excellently on the closing track, “DUCKWORTH.” This song tells the story of how Anthony “Top Dawg” Tiffith, the man who signed Lamar, almost killed Lamar’s father. It’s a surreal story, and the importance of it isn’t revealed until the end when Lamar says, “Because if Anthony killed Ducky/Top Dawg could be servin’ life/While I grew up without a father and die in a gunfight.”

While To Pimp a Butterfly focused almost entirely on racism, DAMN sort of explains the conflicts that Lamar has had since releasing that album. Through the sequential influence of TPAB, Lamar gained respect in the hip-hop community but also extended his influence to a larger audience and DAMN. is the official response and extrapolation. It changed the way that Lamar was perceived, and he’s struggled with this perception because he’s still just a regular human being. This motivation has led Lamar to creating another powerful album. It’s debatable whether DAMN. will garner the sort of impact that it’s predecessor claimed, but it is still a robust project with a lot to offer and Kendrick shows up on top once more.