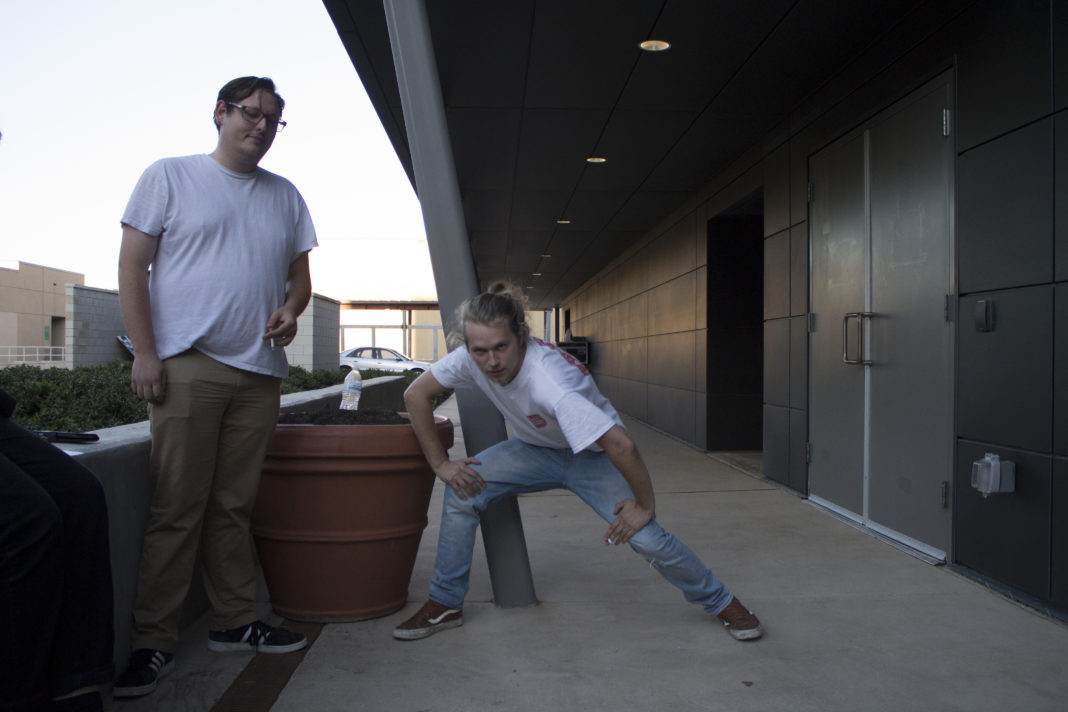 We spoke with Charles Knowles and Keelan Tollefson of Denton electronic project Arouz. The pair lives at Glorp Studios, a house venue that doubles as a recording studio and label. Glorp Studios is relocating soon, and is hosting the final show at its current location this Saturday.

Radio UTD: What are your positions in the band? If they can be split up in that way.

Keelan Tollefson: We pretty much just make music together.

RUTD: What have you two been up to lately?

KT: We’re trying to get the label off the ground. RUTD: Cool. How are you feeling about Glorp closing on Saturday?

CK: An end of an era, that’s a good way to put it. It’s gonna be kinda weird but also kinda nice, you know. To get out of Denton for a while and see different faces and places.

RUTD: And you do have another house already settled and figured out?

CK: No, we have an area already picked out which is, you know, Far North Dallas or Carrolton or Richardson. Anywhere in there.

RUTD: And you are intending to make it a venue, wherever you end up?

RUTD: Do you have anything in mind layout-wise or neighborhood-wise that could be– I know in your current situation, the neighbors aren’t really down with it.

CK: Yeah, our neighbors don’t really like us very much, but we’re going to try to do kind of like a Boiler Room Los Angeles kinda style thing, where it’s a little more private and like a room where artists can DJ what they wanna do and the kind of style they like listening to. It’ll be a lot more intimate feeling. I also wanna– if the backyard is right for it, I wanna throw backyard parties.

RUTD: That would be cool. I would imagine that area might be a little more suited for that kind of thing.

KT: If we’re going to shift our focus more to the label side of things and the recording studio side of things, then the venue aspect is going to be a little more low key.

RUTD: One more quick question about Denton stuff. As people who are performers as well as venue hosts, how are you feeling about Denton’s DIY scene currently, after all the closings that happened over the past year?

CK: I think it’s fine. I don’t think anything’s ever going to happen to the DIY scene in Denton. It’s just a great place for it. Rubber Gloves closing and all these venues closing, I don’t think it’s going to change anything too much.

KT: It definitely puts most of DIY scene more in the house show circuit, with all the legitimate venues closing down.

CK: I think it puts the house venue on a different pedestal, at least in Denton. But, yeah, I’m not worried about it at all, it will keep going on forever probably.

RUTD: Awesome. We’ll transition more into your music now. How did you two meet and how did Arouz become a thing?

CK: We met through a group of friends. We actually went to high school together but we never hung out while we were in high school. We started a band called Drouz which was kind of like a shoegaze kind of thing, and the band split.

KT: We ended up hanging out a bunch outside of band practice too, and so we were like “Let’s make electronic music.” I had already been making electronic music for a while and you were interested so we started producing together.

CK: And it all went down. It originally was kind of like a funny spin-off of our shoegaze band–

CK: And it ended up having more longevity than Drouz [laughs] RUTD: What is the production process like for your music?

CK: Typically it starts out with each of us on a clean slate project file, and we typically find all the sounds that we’re gonna use for our song before we start making it, and then we start building patterns and writing melodies. Then after that we start mixing it and put it all together in playlist mode. By the end of it, often times we get to a point where we can’t think of anything else to add, so we’re like “Alright, well… we’re done.”

RUTD: I know you make stoner metal music as well. What kind of influences do you have in general? It’s interesting for someone to make that kind of music and then come over here and make electronic music.

CK: As far as inspiration goes, for Anwar, it’s a lot of Weedeater, Sleep, Electric Wizard, Bongzilla. Those are our prime four right there. We listen to them a bunch and smoke some dope and play our instruments.

RUTD: What’s that going to be like compared to Arouz?

CK: Arouz is a lot more centered around break beats and drum breaks, and DJ Cactus Cooler is probably closer to a classic hip-hop kind of feel for the most part. There’s still some break beat on the album, but I wanted to try to collaborate with as many people as I could for this album, and, you know, just listen to a lot of 90s hip-hop to inspire me to write it. I’m super excited for it. I actually have someone rolling up here later with the CDs.

RUTD: Cool! So the last one is a fun one– if Arouz could be sponsored by any food or any product, what’s the goal?

CK: That’s the goal. I want to be eating some fruit and getting sticky shit all over my equipment. That’s the end goal.

CK: That or Tesla.

PHOTOS FROM THE PLUG AND PLAY SHOW UP SOON!