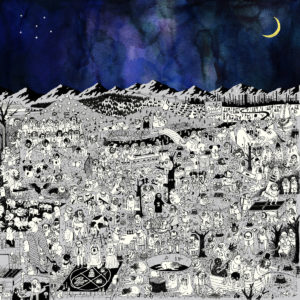 “Oh great, that’s just what we all need/ Another white guy in 2017/ Who takes himself so goddamn seriously.” – Father John Misty, verse 4 of “Leaving L.A.”

“I used to like this guy/ This new shit really kinda makes me wanna die” – Father John Misty, verse 8 of “Leaving L. A.”

Gaining a small following as a passable Iron and Wine knock-off in the late 2000s, folk singer-songwriter Josh Tillman shifted his solo career into a more colorful direction with Father John Misty in 2012. The second record under this moniker, the quasi-romantic, oftentimes hilarious I Love You, Honeybear, rocketed him into indie fame. Never one to rest on his laurels, Tillman decided to follow-up the successful record with something more ambitious and distinctly less accessible. Taking cues from the deadpan social satire of the 2014 album’s standout tracks “Bored in the U.S.A.” and “Holy Shit,” Tillman broadened his sardonic scope even further to create the sprawling, idiosyncratic Pure Comedy.

The album’s folk rock instrumentals are gorgeously arranged and Tillman’s surprisingly malleable voice has never sounded better. Yet, the lush arrangements are only a backdrop to the main draw, the lyrics, and there are pages upon pages of lyrics. As a songwriter, Tillman attempts to construct his own twist on the incisive balladry of singer-songwriters like Nick Cave, John Lennon, and Randy Newman. Much like his influences, he aims his critiques on the many areas that society proselytizes in attempt to claim absolute truth: religion, politics, and entertainment.

This collection of tracks is definitely not for everyone. Especially on first listen, this hour and fifteen minute record of some dude passionately singing about how the world is (mostly) fucked can be a slog to get through. Even once the listener adapts to Tillman’s endless ranting, one could easily dismiss the record as pretentious and overbearing with nothing of value to add to an already overstuffed and endless conversation. With topics this lofty and complex, he cannot possibly cover them all with finesse. For example, the dramatic “Two Wildly Different Perspectives” is unable to convincingly cover the dissertation level complexities of the “both sides are basically saying the same thing” argument.

In contrast, the bitingly critical “Ballad of the Dying Man” may be his most successful satire yet. The track takes a shot at the internet social critics (oftentimes a sinister form of slacktivism) that so often preach on Twitter and Facebook. Ultimately, the underlying target is the narcissism of American culture and he summarizes this issue with the impeccably performed line, “what he’d give for one more day to rate and analyze / the world made in his image as of yet to realize.” Similarly perceptive tracks like “The Memo” and “When the God of Love Returns There’ll Be Hell to Pay” effectively ridicule and critique both consumer culture and religion.

While on the surface Pure Comedy may come across as purely nihilistic, he seems to adhere more to an absurdist philosophy. As outlined in the title track and the lengthy “Leaving L.A.,” life has no inherent meaning, but we should strive for meaning regardless. This sentiment echoes the “vanity vanity all is vanity” ethos of Ecclesiastes (which Tillman quoted extensively in his Facebook manifesto preceding the album’s announcement). Within this worldview, the main goal of the record is to confront the human tendency to impregnate meaning into the form of gods. Whether he is able to effectively convey this message or not will certainly vary greatly depending on the listener.

With indie bands becoming blander than ever, such a singular voice is a refreshing change of pace. Even if what he says irks the listener, at least he is saying something of substance as opposed to another set of banal platitudes that will be forgotten as soon as the summer ends. This is not to say that pop music is useless, it absolutely has its purpose, but to only consume art that is solely meant to entertain can lead to the worst forms of complacency. If positive change is to occur on a societal level, there has to be an intellectual engagement in the country’s culture instead of a mildly active form of apathy. This concept is especially important in an era where politicians and activists seem to be more concerned about simply destroying symbols than intelligently fighting against the ideas these symbols represent.

As referenced at the beginning of the review, Misty admits his faults throughout the record. While recognizing the album’s issues is an amusing way to deflect criticism, it doesn’t necessarily justify the listener to forgive them. Pure Comedy is undoubtedly an overly ambitious record and its shortcomings are apparent. Nonetheless, the gorgeous instrumentation mixed with Tillman’s insightful writing easily makes Pure Comedy one of the most essential singer-songwriter records of the decade.