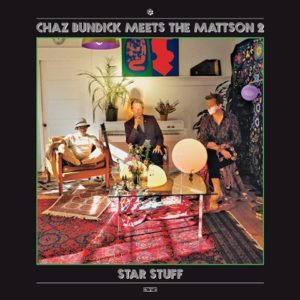 Chaz Bundick joint project with The Mattson 2 create a laid back psych rock album that expanded both artists repertoires in a fantastic way. The three came together after the Mattsons happened to borrow Bundick’s drum stool for a show, and on its return they chatted in a coffee shop for hours and discovered a common understanding of musical influences and ideas. Inevitably, and without context to each other’s music, they decided to go into the studio together. Bundick originally was only going to engineer and produce some songs for the Mattsons, but after little time together Bundick got in and contributed compositionally and was jamming along with them. Though Bundick heavily contributed to the creation of the album, only in some songs is he actually playing bass or singing vocals, while others are completely played by The Mattson 2.

The first solo release of the album was “JBS,” a smooth, dreamy melody intermixed with a lazy, dry verse that captures the feeling of wanting to relax and lay in bed all day. The track was originally The Mattson 2’s, but Bundick got his claws on it and mixed in synthesizers, chimes and his own vocals to create a true collaboration of the two. The jazzy guitar melodies of the Mattsons are perfectly blended with the electronic and indie rock influence of Bundick, making “JBS” the showrunner of the album. Before hearing the first lyrics of the album “I think I’ve gone and lost my mind” in “JBS,” we are clued into that fact by the first two songs before which are an exploration into psych rock, ambient experimentalization, and jazz. The first, “Son Moi,” is mostly guitar led, reminiscent of Jimi Hendrix and the like, but begins and ends with a wavering, chiming, instrumental section that brings to mind laying on the beach with ocean waves even heard crashing in and out at the end. The next song “A Search” continues in a more indie rock direction with soft, simple harmonies, but the same laid back, hazy feel. The two songs create a calming, psychedelic experience that are a good building point to the alluring melody of “JBS.”

Star Stuff as a whole is a pleasing collaboration of two different artists that works very well in some moments, as in “JBS,” but is also interesting and fun throughout. The combination of jazz, rock, electronic, and overall experimentation created a captivating and surprisingly cohesive composition.