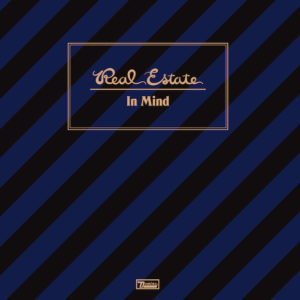 From their beachy, lo-fi sounds of their 2009 self-titled debut to the polished jangle pop of 2014’s Atlas, Real Estate have maintained a reliably laid-back vibe throughout their career. While detractors may complain that their relaxed tunes easily slip into the background (even the band admits this), close inspection of the best tracks in their discography reveal a band that possess a singular ability to write fantastic guitar melodies with catchy hooks. For better and for worse, these basic principles do not change with their most recent effort In Mind.

As is the case with every new Real Estate release, In Mind adds a few subtle, new colors to the band’s pastel palette (11 songs instead of 10! Prominent use of synths and piano!! Slightly distorted guitars!!!). With the recent departure of guitarist Matt Mondanile (also of Ducktails fame), guitarist Julian Lynch is added to the mix lending noticeably distorted guitar tones to the band’s typically lush, clean sound. Tracks like “Serve the Song” fully display this change in lineup with the slight integration of fuzzy guitars. Nonetheless, the album maintains Real Estate’s signature style while also conjuring a hazy, psychedelic atmosphere.

Album opener and easily the best track of the bunch “Darling” successfully sets up the mood of the album. True to form, the band magically works in whimsical guitar melodies and synths that easily match any of the catchiest tracks on Atlas. Another highlight “After the Moon” has lead vocalist Martin Courtney place his typically obscured voice at the center of the mix with a lounge friendly slow jam. The track finishes off with an ethereal instrumental that is so hypnotic it could have easily been stretched into a standalone song. The decidedly more psychedelic vibe of the album is most effectively represented on the album’s centerpiece “Two Arrows.” During the chorus, Courtney adds classic ‘60s effects to his vocals that are reminiscent of the Sgt. Pepper-era Beatles. The band ends the song with a mesmerizing, repetitious jam that succeeds as the most adventurous and entertaining section of the entire album.

Outside of these few instances, the album is generally pleasant but is unable to maintain a consistent mood or establish any reliably great melodies. For instance, “Holding Pattern” is an upbeat, dance friendly track that displays too slight of a melody to make a significant impression. Similarly, “Same Sun” is a short and sweet summery jam with some beautiful backing vocals during the chorus, but, ultimately, it cannot rise above being merely average. The uninspired, mediocre Alex Bleeker-fronted track “Diamond Eyes” is the weakest of the selection. The brief tune best encapsulates how the typically agreeable Real Estate formula can quickly morph into soporific territory.

While the band seems unable to make a truly bad song, they struggle to create a full album of sparkling, memorable pieces with In Mind. Nevertheless, the album is undoubtedly an enjoyable listen and, just like their previous releases, will be a charming soundtrack to many future normcore parties.