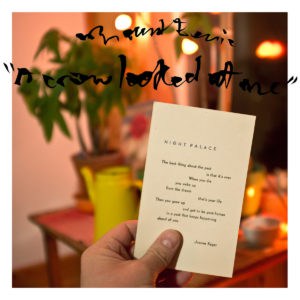 With two verified classics and (depending on who you ask) at least five great albums over his twenty plus year career,  experimental singer-songwriter Phil Elverum may have one the strongest discographies in the history of independent music. His unique blend of lo-fi folk and high concept production wizardry has consistently expanded his musical boundaries. Yet, with A Crow Looked at Me, Elverum has stripped back all of his aesthetic flourishes to create a raw, overwhelming human album.

The record was made during the aftermath of the death of his wife of 13 years, Geneviève. During the following months after her passing, Elverum wrote and recorded his intimate feelings about the tragic circumstances while also taking care of his one year old daughter. “This new album is barely music. It’s just me speaking her name out loud, her memory,” said Elverum during a revealing interview with Pitchfork. This personal document clearly displays an artist compelled to express love, yearning, and intense grief towards the loss of the most important person in his life.

Musically, A Crow mostly consists of sparse guitar arrangements with the occasional use of the piano or subtle drum machines. This intimate soundscape is purposefully created using, “mostly [Geneviève’s] instruments, her guitar, her bass, her pick, her amp, her old family accordion.” Despite the low key instrumentation, the album gently demands your attention and cannot function as background music.

Similar to Sun Kil Moon, the lyrics eschew abstraction and focus on a crystal clear, diaristic writing style without choruses. Yet, unlike Mark Kozelek’s ramblings, which oftentimes come across pompous or mean spirited (especially post-Benji), Elverum’s tone is consistently humble and relatable. While the writing is simple on the surface, the extremely personal retelling of his darkest moments are overpowering in its emotional impact. A massive amount of gravitas is imbued into each phrase with his frail, unpolished singing. Even upon repeated listens, his words continue to reveal further emotional depths and nuances. Particular phrases like “her absence is a scream/saying nothing” or “the room will hopefully stop whispering” are so striking that they could easily have lengthy articles written on them individually.

With recurring lines such as “you’re not here” and “death is real” throughout the album, many of the songs function as personal reminders that attempt to force the reality of her death into his mind. The haunting centerpieces “Ravens” and “Soria Moria” ruminate on how he felt before her death and how so much of his current daily life is filled with his memories of her. In perhaps one of the most jarring sections of the album, Elverum describes an event where he forgets his wife’s death and eagerly desires to talk to Geneviève until he remembers that she is gone.

As the songs reiterate over and over, Phil is both tortured by the memory of Geneviève but also intensely fears that her memory will fade. The heartbreaking track “My Chasm” describes how he can’t help talking about her despite knowing that it makes others uncomfortable. He even goes as far as labeling himself as merely a “container of stories about you.”

While the album is undoubtedly a melancholic affair, there are moments of light that shine through. The most uplifting track, “Toothbrush/Trash,” perfectly conveys the paradoxically happy and miserable state of acceptance. Additionally, tracks like “Crow” and “Swims” paint delicate portraits of Elverum interacting with his daughter. Although Geneviève’s absence saturates these tracks as much as the rest of the album, his relationship with his daughter reveals a hope for his future.

Despite being a journal of one man’s emotionally complex mental state, A Crow Looked at Me is indisputably universal in its themes and message. While it definitely is not Elverum’s most ambitious record, the profound emotions within this work make it one of his most essential releases.