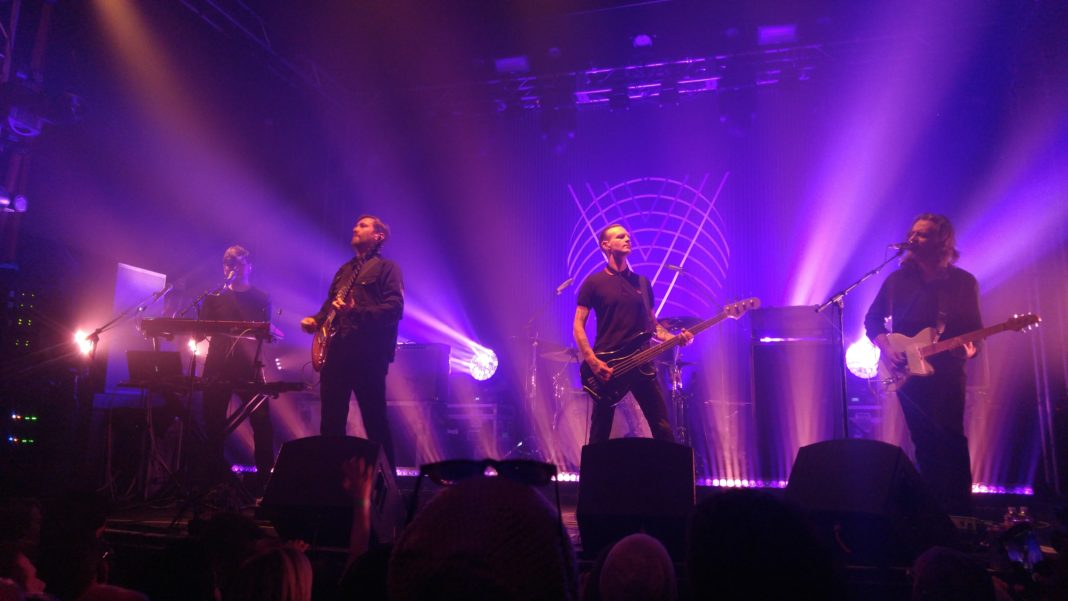 Minus the Bear has been in the indie-rock game forever. They’ve released almost a dozen EP’s since the early 2000’s and earlier this month dropped their fifth full length LP, VOIDS. Bound for Austin’s enormous SXSW music festival, they stopped by Dallas Tuesday night to play a set filled with classic hits and new goodies. Bayonne was the first supporting act to take the stage. Bayonne is the stage name of talented Austin native Roger Sellers, who came prepared with a table full of looping equipment, a small two piece drum kit and a penchant for loud experimental music. His set was passionate and colorful, revolving around live loops of his harmonious vocals and energetic drumming. He was a veritable one man band, evidenced when his timed vocal loop opened up over his punchy live drum beat playing his newest single “Fallss”. Beach Slang brought a more punk-rock vibe to the Granada. Frontman James Alex came on in style, wearing a bow tie and a blazer embroidered with a bright red heart. Their set was a mix of harder, punk material from their records and covers of famous acts. They found time to play “Wonderwall” even! Alex humorously started singing “One Week” by the Barenaked Ladies, but laughed it off into their next song.

Minus the Bear finally emerged from a fog of deep purple and cream accents, the trademark colors of their newest record VOIDS. They had brought along four enormous LED spotlights to paint the stage and audience in their beautiful colors. Jake Snider’s uniquely recognizable vocals harmoniously blended with Alex Rose’s to create the exclusive Minus the Bear sound. Dave Knudson ripped some awesome solos despite awkwardly standing dead still front and center to do so. Overall, classic songs were met with excited fist pumping and screams, while material from their newest album fell into general head bobbery. Perhaps it will take their audience a few repeat listens to connect with VOIDS.