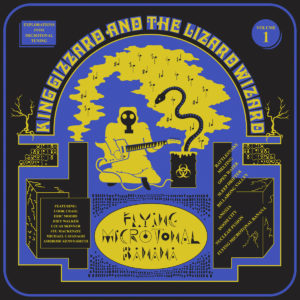 King Gizzard and The Lizard Wizard are a breath of fresh air, atypical, in a genre that’s flooded by bands with little craft or musicianship trying to get popular simply by being weird. The quality of King Gizzard’s music leaves their strange antics as more of an afterthought. The seven-man band consists of 2 drummers and multiple multi-instrumentalists that are constantly exploring new styles on each album. From the more lo-fi surf rock influenced Oddments, to hi-fi powered psych of Nonagon Infinity, to the now progressive genre-ending psych of Flying Microtonal Banana, King Gizzard are able to expertly hop from style to style while still sounding very much like the one King Gizzard and The Lizard Wizard.

Over the course of their seven year existence, the band has put together 10 releases, 2 major EPs, and two festivals called “Gizzfest”. They’ve become incredibly prolific and their work ethic rivals that of many great rock bands. And yet, while they’re constantly touring throughout Australia, their home country, King Gizzard and The Lizard Wizard are far from the public eye here in the states – a sad reality that shouldn’t be the case. Flying Microtonal Banana isn’t King Gizzard’s first love affair with using microtonal guitars, but it is their first album based solely around the microtonal sound.

The whole 42 minutes flow perfectly, creating a sonic haze of melodic, microtonal bliss. The album fits in closer next to Gizzard’s more lo-fi albums such as I’m In Your Mind Fuzz, but it’s sonic complexity puts it right next to 2016’s critically acclaimed release. It’s sonically familiar but completely novel.

The two drummers keep the rhythm throughout the album complex and powerful, while the microtonal guitars, bass, the occasional harmonica and trumpet dance across each track, being pushed to their limits within each. The album toes the lines between psychedelic rock, prog rock, and jazz, fusing a handful of styles which are looked at through a kaleidoscopic lens.

But the familiarity of the group still come through on Flying Microtonal Banana. On the opening track, “Rattlesnake,” King Gizzard hop into a seven-minute psychedelic jam that echoes their past sounds with the same intensity and reintroduces the listener to a signature style. The next track, “Melting” breaks down the listener’s expectations through a funky, jazzy, psychedelic bossanova that probably had Stan Getz headbanging in his grave for five minutes.

Over the course of 9 tracks, there is an obvious experimentation that is unique enough to show solid progress – maybe not past their previous albums, but surely sidestepping along the lines of genius that have been present across their discography. Should you listen to this album? Most definitely. It’ll push the pseudo-psychedelics of bands like Tame Impala out of your mind and reintroduce you to the beauty of Australian psych like its 1960s progenitor. Flying Microtonal Banana is captivating – just try to name a Western band thats better utilizes microtonal guitars.