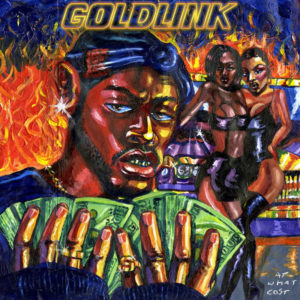 GoldLink’s debut album, At What Cost, has long been anticipated by his fans, hoping that it would be his major break. It’s a follow up to his 2015 mixtape, And After That, We Didn’t Talk, but is stylistically a much different sound than that. While And After That, We Didn’t Talk features many bouncy beats that GoldLink is known for performing really well on, At What Cost is a lot more electronic, and features a few tracks produced by KAYTRANADA.

The album opens with a chaotic flurry of sounds, including screeches, beeps, distorted voices, and even whale noises. There’s a buildup at the end that resolves nicely at the beginning of “Same Clothes As Yesterday,” making it an interesting introduction. However, it’s not until a minute into “Same Clothes As Yesterday” that we finally hear GoldLink himself, the first person to rap on this album is actually Ciscero. It’s a little strange, and can be confusing for new listeners who may think Ciscero is GoldLink at first. It’s not always a big problem, but as a debut album meant to boost his popularity, GoldLink should be the first voice you hear.

Thematically the album is meant to describe what life in the DMV (DC, Maryland, Virginia) area is like. The DMV influences are clear throughout the album, “Have You Seen That Girl” describes the different types of women that can be found in different areas of the DMV, and GoldLink references other DMV artists throughout such as Gleesh. He also has DC artists featured including Wale, Radiant Children, and Shy Glizzy.

The DMV inspirations are very clear, including sonically. Go-go music was created in DC in the 70’s as a subgenre of funk, so GoldLink grew up with a lot of that style of music. However, those factors alone aren’t enough to carry the theme through the project. That theme isn’t immediately apparent, if anything the theme that is easier to pinpoint is a coming-of-age story and a variety of love stories, both of which are played out at this point.

The project as a whole is not very cohesive either, “The Parable of the Rich Man” sticks out and is very jarring. It’s an interesting song, but it does not belong on this project. “Hands On Your Knees” has a very old school sound to it, which is quite nice, but also does not have a place on this album, it compromises the cohesiveness of the album. Which is a shame, because GoldLink has proven that he’s capable of making cohesive projects. And After That, We Didn’t Talk feels a lot more well put together, than this, and even the mixtape before that, The God Complex, is more consistent.

Despite this, there are a lot of good things going on in this album. Although “Meditation,” one of the singles, has an unexplained gunshot at the end. It feels like it’s meant to be a part of story, but insteadit is left unexplained. Nonetheless, the Jazmine Sullivan feature is solid, and the beat, which interpolates KAYTRANADA’s “TRACK UNO” gives a really laid back, nonchalant feeling. Another single, “Crew,” is closer to the bouncy style that GoldLink is known for. He flows over the beat well, Brent Faiyaz sings a soothing chorus, while Shy Glizzy delivers an energetic verse, it all comes together nicely.

“Some Girl” featuring Steve Lacy is another highlight, mostly because of Steve Lacy himself. Lacy produced the track himself, and according to him, he recorded using an iPhone, proving that expensive gear isn’t always necessary. GoldLink’s rapping style is often long-winded, but almost staccato in nature. He’ll slur the words in a line, but the line itself will have an abrupt ending. This style suits the song perfectly, paired with Lacy’s use of an electric bass instrument for the bassline, make it one of the most enjoyable songs on the album.

The main let down of this effort is the lack of cohesiveness throughout the album. Songs such as “The Parable of the Rich Man” interrupt in a harsh manner, and it would have been beneficial to not include it at all.  At What Cost has a lot of good experimentation, with many solid tracks and features. Sonically, it’s a good evolution for GoldLink, and despite not having many of the bouncy tracks that he’s known for, this new sound suits him fairly.