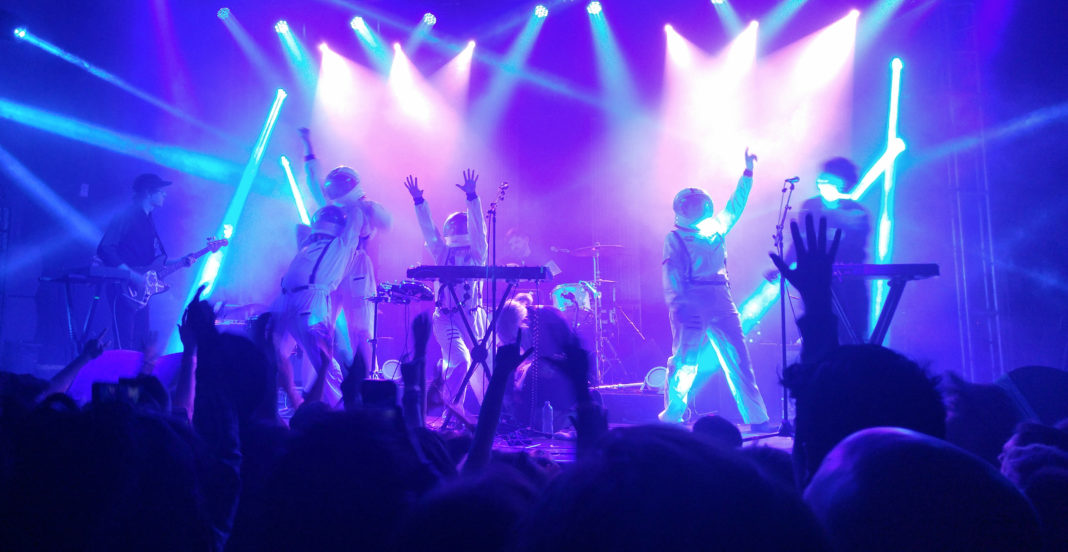 STRFKR is a band that never disappoints. Every new album excites and intrigues fans of the electro-pop genre, and their shows reflect it. With a sold out show and a line that wrapped around the Granada Theater, fans packed the house with anticipation to experience a night of electric grooves. Everyone was prepared for the incredible night ahead, strategically moving around and about to get closer to their musical idols even before the curtains were lifted.

Opening for a band like STRFKR is no easy task, but Psychic Twins rose to the occasion and created an energy that spread across the theater even among people unfamiliar with their music. Their performance was eclectic and experimental, but kept to the core of STRFKR’s synthetic and pop sound. Despite having only two band members, Psychic Twins managed to create a very full sound using vocal loops and a synthesized drum effects. Their music took risks, and it paid off.

Once the lights dimmed for the main performance, the crowd exploded with excitement. The four band members entered, with frontman Joshua Hodges rocking a dress and blonde wig. They were accompanied by four dancers outfitted with cheap astronaut costumes, who jumped around the stage to the infectious beats. STRFKR played many of their groovier songs from their newest record which was well received by the audience. But what the audience really connected with was some of STRFKR’s more popular singles from an earlier era, such as “Rawnald Gregory Erickson the Second” and their cover of “Girls Just Want to Have Fun”. Those songs sparked something intense in the audience, which began to dance and jump along with the space themed hype-men on stage.

Crowd surfing was the highlight of the night. It began with a few people being hoisted up by their friends over the crowd, eventually opening the door for dozens of people to follow suit. People were flying left and right, keeping audience members on their toes and reaching for the sky to protect from rogue surfers. Towards the end of the show, the band decided it would be fun too. Performers in astronaut costumes leaped from the stage to ride the crowd. Eventually, an inflatable raft in the shape of a duck was used to crowd surf. The audience loved this, and happily propelled them across the theater.

The crowd couldn’t get enough. They loved every minute of the performance, and stuck around after the show to perhaps sneak another glimpse of such an amazing band. STRFKR will be missed here in Dallas.