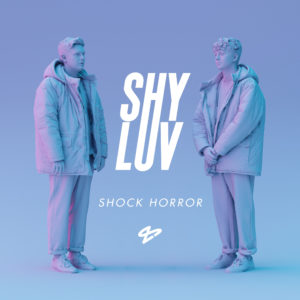 Sam Knowles, better known for his producer alias Karma Kid, resonates with his other project Shy Luv. In collaboration with Jake Norman, the UK duo have attempted to dispatch a slew of tracks which fence-ride between dense electronica and well-polished pop, something that Karma Kid alone doesn’t quite do. This relatively new platform shows promise in the vein of the pop genre, but the over variance in their releases distract from the probable goal of the project, or at least what they should focus on.

The point comes across from the beginning. “Don’t Let Me Down” builds from the distance, approaching the listener like in rotation until about one minute in. Epic strings replace the sounds and twinkle, like a relative to a Bonobo track. The variation on drums and whirring synths blip to the drop where the main theme settles, then fluctuates in and out of its dense production through to conclusion.

Following this is the title track, featuring the vocalist JONES. The pop single, which preceded the EP release, exemplifies the many hands of Shy Luv – bending synth tones, twee guitar effects and almost sing-a-long lyrics break any sense of focused tone from the prior intro song and more or less show how the two are just talented producers. The better pairing, or better extrapolation, comes with “Joy Rider” which again features a vast array of instruments to a fun, dancey and serviceable song rhythm. In accordance to their 2015 debut, these two songs further their effort in the realm of accessible and crafted dance pop music, but without compromise (necessarily).

“Nightingale” diverges again, losing the listener or maybe just burying them deeper in soundcloud-esque electronica. The variation is a decent showcase, but with the already brief tracklist on Shock Horror it’s more of an interruption of the previously listened.

We understand that pop can be done in the bedroom – where synths and drum kit software occlude acoustic guitars and microphones – and Shy Luv can do this in a very interesting, way. The four-track EP marks Shy Luv’s debut – despite their true debut back from 2015 which shouldn’t be cast away – but any hope at a full length is hurt by the lack of containment. Regardless of this, Shock Horror is a more than fair production which brings forth qualities from previous releases of Shy Luv as well as branched out production of other influence.