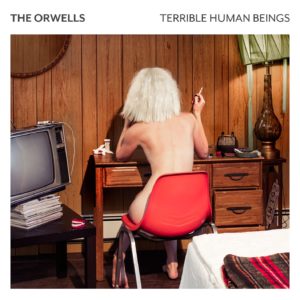 The Orwells have put great effort into crafting their image of youthful, rebellious punks, from their head-scratching TV debut on Letterman’s Late Show to their frontman Mario Cuomo’s ill-thought brawl at Trees in Dallas last year. With their latest work, Terrible Human Beings, they seek to present a more mature image, but end up with a scattered affair of an album. Garage rock is an age-old genre, and after their last album, Disgraceland, The Orwells didn’t innovate much at all. Terrible Human Beings, is an attempt to shake things up, but their efforts fall flat.

Most songs leave a little to be desired. The clean production of Jim Abbiss only really works well with a few of the songs, and the majority of the album would’ve been better with the fuzzier, garage-esque production of the band’s previous album. As it stands, the amped-up, big label production only serves to create a dissonance between the band’s sound and their message – it’s kinda hard to sing about partying hard and not giving a hoot when your band sounds like it’s paying a bunch of suits $10,000 to record each track. Lyrically, Cuomo tackles some more serious topics, such as degrading friendships (on “Creatures”), or the negative effects of listening to KISS as an impressionable youth (on “Double Feature”), but still ventures into questionable territory with lyrics like “Told me ‘Act your age’ / That’s why she’s underage.” As young adults who are looking to be taken more seriously; they seem a bit confused.

The Orwells do get a lot right. The brash, combative, and sometimes vulgar nature of garage rock shines in lyrics like “Rob your family/Kill your neighbors!” (“Fry”) and “They’re on vacation, masturbating” (“Vacation”). Instrumentally, the album is consistently solid: Cuomo’s voice is smoother and deeper this time around, complementing the songwriting; Henry Brinner’s drumming is never anything special, but fulfills its role well enough; the guitars range from interesting to blandly alternating between minor chords – a staple of the genre. All this in mind, the album is mostly lean and fast-paced in the garage-rock tradition and no song overstays its welcome.

However, there is an exception; “Body Reprise” is seventy-five seconds of reverb-drenched moaning and static, and completely jars the listener out of the flow that Corso and O’Keefe’s guitars generate through the first two-thirds of the album. One wonders why Cuomo and friends decided to go experimental on the listener after sticking to the basics for so long. The rest of the album fails to regain the momentum before petering out on “Double Feature.”

With Terrible Human Beings, The Orwells have delivered a mediocre follow-up to Disgraceland. If you’re looking for ambitious songwriting, or anything experimental at all, look elsewhere, but if you’re looking for a decent 40 minutes of garage rock, at the surface The Orwells would probably have nailed it. The album’s misadventures into youthful experimentation dampen the experience significantly, where serious mismatches of tone, lyrics, and production mar Terrible Human Beings. A few catchy ballads carry an otherwise mediocre collection of songs and that’s not quite enough.