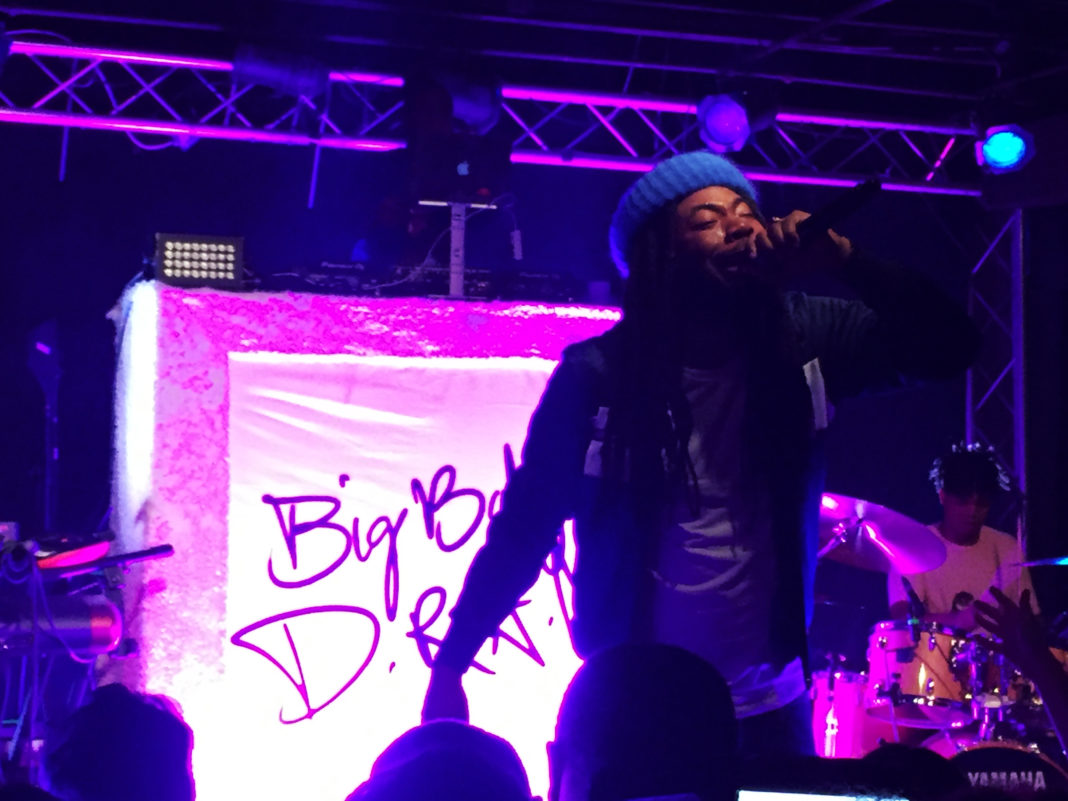 The Loft gradually filled with the diverse crowd of Dallas. Teens, college kids, young adults and working class of all colors seemed to want to see the spectacle that is D.R.A.M., and who wouldn’t?

Starting off a bit of a mystery were three men on guitars and drum machine. A quick tune up to a thick rhythm cued them in and the song started in an instant. River Tiber took to the microphone and sang without any introduction, thickening the song. His band mates harmonized well with their out respective mics, as well as soloed with poised and dramatic character – his face said it all. He later introduced himself and the band. The short set was concluded with a thank you and final track.

Another act and two lengthy intermissions later, The Big Baby D.R.A.M. band (for lack of better name) walked onto stage. The drummer banged the toms and hats onto of the DJ beat for sound check; the bassist and keyboardist followed. D.R.A.M. entered and the crowd went nuts.

A master of words, D.R.A.M. rhetorically spoke to the audience between songs and smiled. He touched the front rows hands, even gave an audience member a little twirl. His dreaded hair hung low and swung under his knitted blue hat when the rhythm picked up.

A definitive highlight of the night, after a sequence of notable ballads from his album, was “Cute,” which while live provided one of the best beats of the night while also evoking a very passionate vocal and jigging performance from D.R.A.M, himself. “Cash Machine” also made for a hit, shaking the floor as people jumped all at once to the infectious piano riff and rhythm.

Fingers were crossed for the Dallas native Erykah Badu to come out to the mastercraft track “Wifi,” which features the R&B legend and prompted a thank you from the artist in the city he was visiting.

A few times, strangely, D.R.A.M. had to leave without reason in a moment’s notice, all from a single motion of his body guard who we referred to as Boss Man. Boss Man’s face wore a look which spelled out “it’s about to go down any second,” so each instance D.R.A.M. had to leave, it started to seem something actually was about to happen. The show was being cut early and D.R.A.M.’s mic cut from the speakers, but not without one final song.

Following the beloved and breakout track “Cha Cha,” D.R.A.M. promised next time he came back everything would be better – the sound, the consistency, “everything!” The keyboardist played those unmistakable chords to introduce “Broccoli.” He held out the replacement microphone to the crowd as they chanted in unison,

The rest was history and The Big Baby D.R.A.M. tour wrapped up its 14th stop in Dallas.