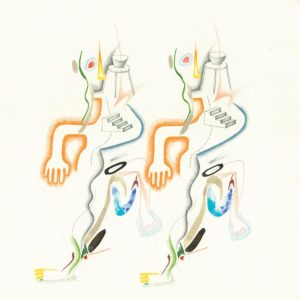 Almost exactly one year since their latest album, Painting With, Animal Collective have released their 4-track companion EP, The Painters. The band was actually considering a name change before the release of Painting With, and The Painters was one of the main names they were considering, making it a fitting name for the EP.

Conjured during the same recording sessions of the full length, The Painters features the same bright and dizzying style. With heavy use of the synthesizer, per usual, the music has a thick texture, with various different melodies and harmonies woven over each other.

The single “Kinda Bonkers”, was debuted at a concert on February 9th, before being officially released as the energetic intro to the EP, using Shazam to find the track ID and EP. The song starts out simply, but slowly more and more layers are added until it becomes a swirl of various different sounds beautifully intertwined and the color of the song explodes. Panda Bear and Avey Tare go back and forth for the entire song, adding on to the chaotic nature and set the course.

“Peacemaker” follows gives the listener a much needed break, however, after the tumultuous opener. Maintaining the layered texture that Animal Collective is known for, it’s much more relaxed and the vocals cascade over the clean instrumentals. Not much emphasis is put on the lyricism of this project and words are often hard to hear. Notably on “Goalkeeper,” the lyrics that are audible are often lackluster, such as “Life is so French toast to me/If you wait too long/It gets black and weak” on “Kinda Bonkers.”

Their synth-heavy cover of “Jimmy Mack” closes out the EP with the same level of energy that they opened up with, and given how different Animal Collective’s style is compared to Motown’s this cover works surprisingly well. The band incorporated this song into their 2016 tour set list.

Given the mixed reviews for their previous release, Painting With, was, this feels like a much more solid release and well-to-do companion EP. Its short nature makes it seem much more focused than Painting With was. The foolish nature of Animal Collective is better consumed in short bursts as exemplified with The Painters, but regardless we always welcome AnCo with new tunes anytime.