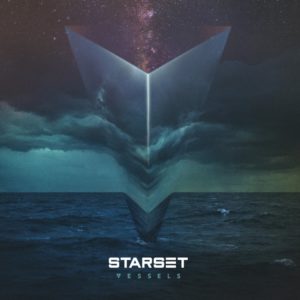 Starset is an eccentric space themed hard rock band lead by vocalist and keyboardist, Dustin Bates. Bates is an electrical engineer with a PhD. and flair for the scientific, but is best known for leading his previous hard rock band, Downplay. Starset is known for their showmanship and style, as they frequently perform wearing full spacesuits and over play a  sound is relatively simple. Blending hard rock with metal, interlacing it with pieces of electronic and orchestral instrumentation. Bates has described their sound “as if a hard-rock band did the soundtrack to an epic blockbuster movie” and Vessels is his best attempt at pursuing this.

Vessels is actually the second attempt at a rock opera. There is a narrative woven throughout the album, describing a dystopian sci-fi future in which the band is being hunted by a secret government organization. Fitting this story into a traditional hard rock album is an ambitious undertaking, but the band clearly takes their fictional storytelling very seriously, committing further by staying in character and  describing stories as fact in many interviews. Lore can be read via the band’s website, describing their sci-fi story in detail.

But Vessels takes this to heart and sonically opens with an epic track, clearly inspired from composer Hans Zimmer, titled “The Order.” This clearly establishes their epic blockbuster tonality that was lacking from their debut album, and just as soon transitions into “Satellite,” the first hard rock track of the album. This track is a marked improvement in the sound Starset has set out to form; the electronic instrumentation and lyrical choices show a fluid marriage of the space narrative with their hard rock sound. Other songs like “Frequency” feature an intense heavy metal styled breakdown, with pieces of screams from Bates, adding intensity to the record but suffers from repetitive lyricism.

“Monster,” a catchy but otherwise bland song detailing Bates’ internal struggles with his inner monster. This clichéd concept has been dragged out repeatedly by other hard rock bands, and despite Starset’s creative concept for their newest album, they still find time to add in boring rock anthems which even this aberrant of an album can’t avoid.

Overall, the hard rock sound on Vessels has improved vastly from their first album. The narrative concept of Vessels was integrated much better, but the electronic and instrumental pieces aren’t enough to distinguish Starset from other artists of the genre. Everything just ends up sounding like Breaking Benjamin. Starset took a fantastic concept for a record and placed it within the confines of straightforward early 2000’s styled numetal, where hard rock is energizing but thoroughly played out and uninteresting. It would have been great to see the sci-fi aspects of this record shine through the generic rock.