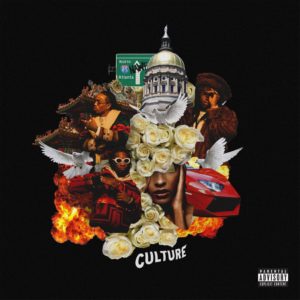 Migos’ sophomore album Culture has been building up a lot of steam and anticipation over the past couple months. In October 2016 “Bad and Boujee” was released and within weeks it topped charts and became their first number one single, becoming somewhat of an anthem for Migos fans everywhere. People chanted in unison, “Rain drop, Drop top;” memes flooded the internet; Twitter and Instagram realm were helpless to the hip hop earworm. The single got even more recognition during Donald Glover’s 2017 Golden Globes acceptance speech where he shouted out the trio and stated that “‘Bad and Boujee’ is the best song ever.” The trio originated in Atlanta and they’re the embodiment of southern hip hop, providing their own unique perspective and sound with dirty trap beats and flow that have been widely imitated. With the spotlight on them and their recent single, there are a lot of expectations for this album and it’s safe to say that Migos came through on CULTURE.

This album exemplifies the signature Migos sound that everyone has known and loved since 2013. There are many great features like fellow Atlanta rapper Gucci Mane, as well as Lil Uzi Vert, 2 chainz and Travis Scott. This album isn’t filled with fast beats and heavy drops, but instead has a soft, subtle hype that runs consistently through each song and without shortage of “Brrr” and “Skrrrt” ad libs throughout the album. Migos stay within the southern trap vibe, similar in vocals to artists like Future, and they bounce off each others’ flows and complement each other exquisitely. Their signature triplet-set rhymes can be found in Takeoff’s verse in “Call Casting”. “I need ten, that’s a dime, Want a nickel, that’s a five, One to fly, one to slide, One to glide, ain’t got time” keeps the bounce going, and gives the song a generally more upbeat sound. They’re much imitated stop-and-response flows can also be found on most songs in the album, and it brings excitement into the music and makes it really easy to turn up any crowd. Something to commend the Migos on, is the fact that there is no lack of rhymes and the album is packed full of raps from each artist, providing a different vibe and flow but meshing together in perfect harmony.

Unlike some other trap hip-hop tracks that are mostly chorus heavy, there are a lot of hidden gems within the verses, such as the narrative about their lifestyle, and rep the “culture” that they know. For example, second track “T-Shirt” is a huge shout out to their hometown and has already sparked excitement on twitter from ATL natives.

The songs don’t get boring because of the dynamics within the song and bouncing from flow to flow, but the album as a whole doesn’t have that much diversity. It’s a uniform project and it proves once again that Migos are really good at being themselves. Some may raise the question of whether or not they can do anything different than what they have been doing for the past couple years.

“Old-timers” and classic hip-hop lovers like to criticize new age hip-hop and dismiss its’ creative and innovative contributions. Culture displays Migos’ unique style and whether people like it or not, the genre of hip hop is changing. Classics will always be classics, and many rappers continue to stick to the principles and values of old school hip hop, while rappers like Migos represent a new phase of hip hop with their own artistry. Migos’ lyrics don’t hold a lot of insight and important contextual bars, because the focus in their music is on the style, beats, and delivery of the verses. They have made huge impressions in the hip hop scene and many rappers continue to use the “Migos flow” that is credited to Quavo, starting from his verse in “Versace” all the way back in 2013. The third verse of the fifth track on Culture,“Get Right Withca”, displays many of the stylistic techniques that make the signature Migos sound, specifically the use of triplet-set rhymes that uses the words to create a rhythmic pattern (Migos flow).

“Pop me a missile (ayy), Take me a picture (flash), Get right witcha (I’ma get right witcha), Lit like Christmas (like Christmas), White like tissue (white), Drank too official (drank), Cut like scissors (cut), Boy got wisdom (wisdom)”

This album does exactly what it was intended to do, but that being said it’s hard to say this album is genius. What Migos have to offer lacks a certain significance and depth that is necessary in creating a true masterpiece or genius album, but they remain to be the masters of entertainment in our time.