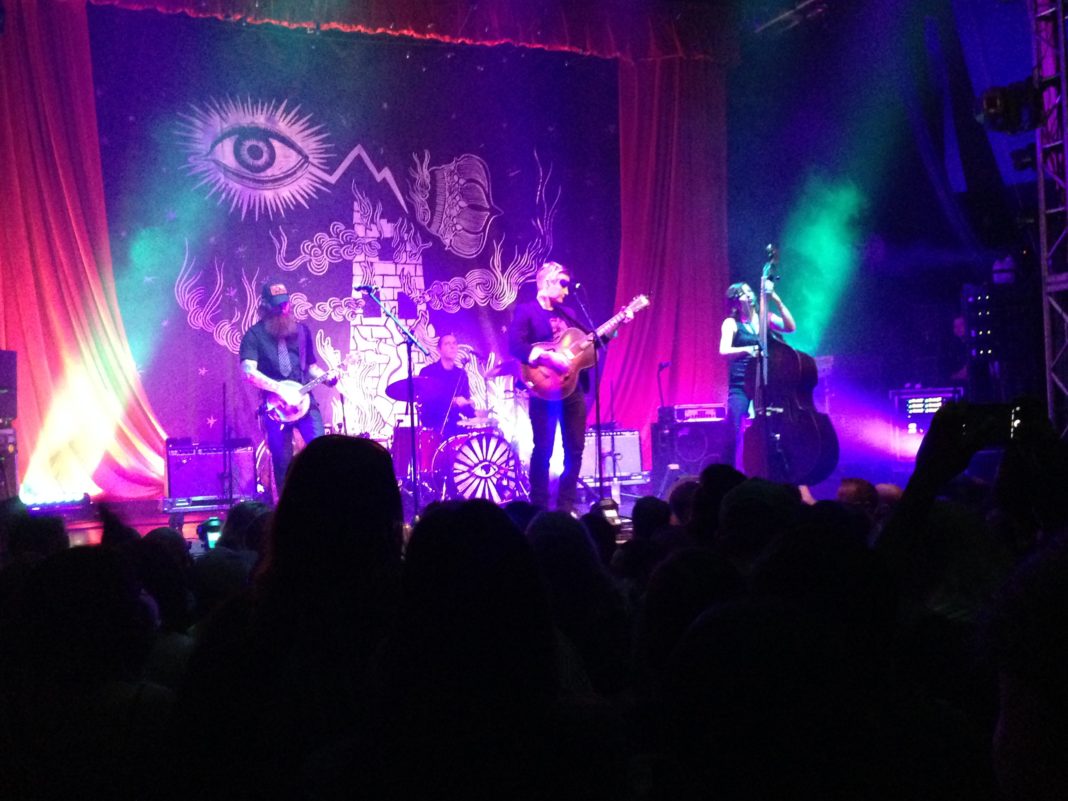 “Keep your pants on. Don’t get arrested.” Lost Dog Street Band told the crowd gathered at the Granada these words and I would be surprised if everyone achieved these goals. It was a packed lower floor that hollered back, a mix of scruffy guys straight off Storage Wars on A&E and country punk girls covered in tattoos and finely dressed ranchers with crisp felt cowboy hats. Mostly drunk. Some high. All losing their minds for folky swing music. The DiTrani Brothers took the stage first. The four piece band looked like they walked straight off the plank and onto the stage with their pirate-punk aesthetic. Between them, there were at least four ear rings and three nose rings and two fedoras. The woman in the band played the most unique instrument: an upright bass made of a metal tub base, a broom handle, and a single string held taut that she plucked in rhythm and the guitarist played in a classical style that clearly indicated he had immense talent. Their sound was fun and begged the crowd to move as they changed tempo and sang of travelling and their home in Washington. If I had to describe it, I’d string together the words pirate folk swing music. Like if the Squirrel Nut Zippers regularly attended the Ren Fest. The husband-wife duo Lost Dog Street Band followed with a set of sad, gritty songs. They dressed in Wild West period clothing that showed off the neck tattoos adorning Ben, the husband, and the timeless prettiness of Ashely, the wife. He strummed on guitar and she sawed on fiddle through a series of originals and covers, beginning with the first song off their latest album, “September Doves,” and moving on to a reimagined version of “Ramblin’ Man” by Hank Williams. The crowd was very pleased by the selection as they kicked back another beer and lit a joint covertly. Finally, the main act took the stage. To announce their arrival, spooky music whispered from the speakers and a light projecting the image of several eyes spinning in a circle shone against the back curtain. The string lights overhead flickered and the four piece band walked out calmly, took their positions behind three microphones and a drum set. Only pausing to strap on their instruments, they got right to it with a fun jaunty song that moved everyone in at least the front two levels of the floor. With quick lyrics and a swinging beat, the band bobbed and the female bass player shook her hips and the crowd sang along, yelling out the repeated, catchy lines of the song. They started up a new song immediately after and kept going with their country swing music. They stopped playing for an extended time to preach about the benefits of legalizing marijuana, then got right back to it, this time with green lights shining down. Most of the show blended together because the songs sound quite similar to one another, but for a follower of the band or a dancer, it was a fun chance to let loose and sing along.